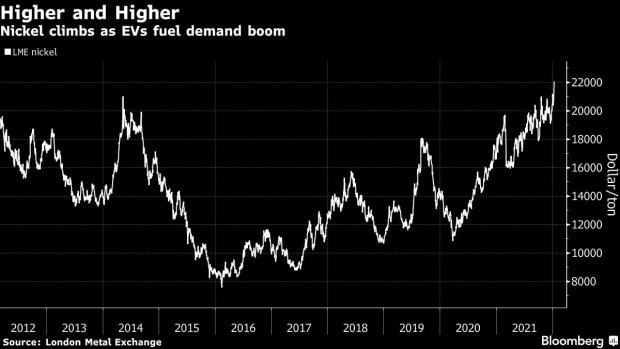 (Bloomberg) -- Indonesia’s pledge to be more than a raw-materials supplier is set to pile pressure on China’s steel to electric vehicles industries that are already grappling with rising cost volatility.

The Southeast Asian country said Wednesday it’s studying a progressive levy on exports of nickel pig iron and ferronickel that could be imposed as soon as this year. Concerns about lower shipments from the world’s biggest nickel supplier sent the London Metal Exchange benchmark surging to the highest in more than a decade. That risks increasing costs for Chinese stainless steel mills -- the top users -- as well as joining a raft of commodities that are becoming an increasing headache for battery makers as prices climb.

Read more: Metals Traders Are Bracing for the Next Big Supply Squeeze

Indonesia has played a key role in global markets as a bulk materials supplier, but President Joko Widodo has pledged to eventually stop exports of all raw commodities to turn the country into a major manufacturing hub for electric transportation. The government signaled in September that nickel restrictions were looming, and has said it will halt bauxite and copper ore shipments, with the ultimate goal of producing all EV components including lithium batteries onshore.

The core concern for Chinese industries is their reliance on Indonesia for supply of ferronickel, a semi-refined product used to make stainless steel. The country gets about 84% of its imports from Indonesia, with Japan, Colombia, Myanmar and New Caledonia accounting for the rest.

While the specifics such as timing and tax rates remain uncertain, Chinese mills will have to accept the “reality” of higher costs due to the industry’s reliance on Indonesia, said Celia Wang, an analyst with researcher Mysteel Global. Higher nickel prices also bring additional pain to battery producers, which are already “very uncomfortable” with high raw materials costs, she said.

Battery metals are in the throes of an unprecedented boom amid a global push to mitigate climate change, with lithium surging to a record and cobalt doubling in the past year. The persistent rally may push up the cost of a battery for the first time since at least 2010, hurting automakers and risking putting consumers off purchasing an EV, according to BloombergNEF.

Read more: Metals Key for EVs Will Be Pricier for Longer After Record Year

Indonesia’s domestic focus may spur more overseas investment for the downstream sector, according to Lynn Zhang, analyst at Shanghai Metals Market. The government said in September that a EV battery plant jointly owned by Hyundai Motor Group and LG Energy Solution will start output in May.

Nickel has been a key focus for Tesla Inc., with billionaire boss Elon Musk previously expressing concern about future supply due to challenges in sustainable sourcing and because demand is set to skyrocket as the world increasingly moves toward EVs. The metal was roiled last year due to breakthrough technology developed by Tsingshan Holding Group Co., the world’s biggest stainless steel producer, that allows it to use its existing Indonesian smelters to supply large quantities of a product that can be processed into battery-grade material.