Chinese companies are ditching their U.S. listings at the fastest pace since 2015 as they grapple with rising tensions between Beijing and Washington.

So far this year, U.S.-listed Chinese companies have announced four go-private deals with a combined value of US$8.1 billion including debt, according to data compiled by Bloomberg. That’s up from zero during the same period last year. It’s also the highest value for any full year since 2015, when US$29.8 billion of such buyouts were announced. 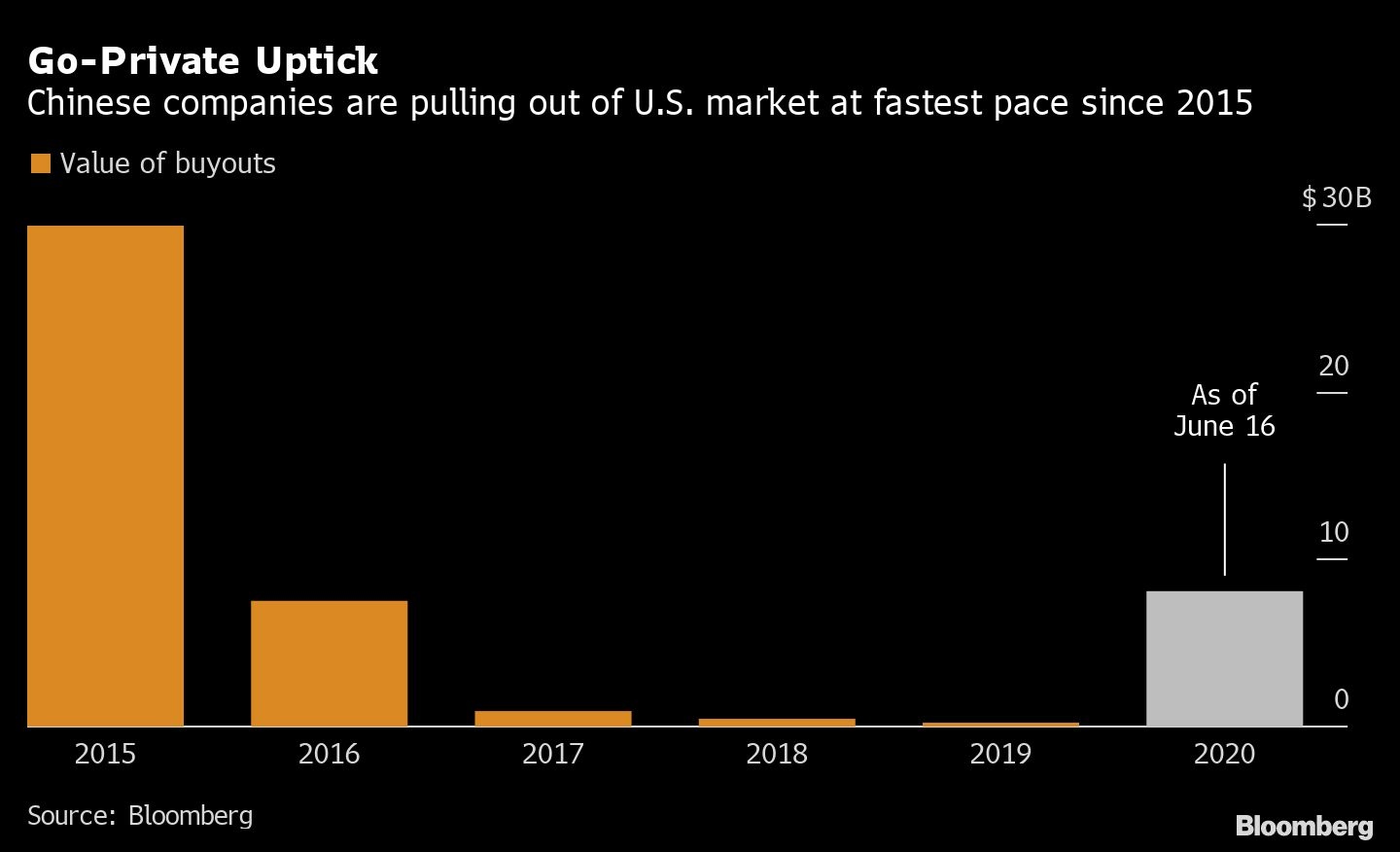 The uptick comes as President Donald Trump weighs tighter scrutiny on Chinese companies after a string of accounting scandals including Luckin Coffee Inc. that have burned some of Wall Street’s biggest names. Nasdaq Inc. is planning new rules that would make initial public offerings more difficult for some Chinese firms, potentially curtailing their access to the world’s biggest capital market.

The COVID-19 pandemic has also made some U.S.-listed Chinese companies look relatively undervalued, according to Steven Tran, a Hong Kong-based partner at law firm Mayer Brown.

“Add in the generally negative sentiment in the U.S. on all things China-related and you have the perfect recipe for an increase in take-private transactions,” he said.

A consortium including buyout firm Centurium Capital in September made a non-binding offer to take China Biologic Products Holdings Inc. private. A deal could value the U.S.-listed biotech company at about US$4.6 billion. Negotiations on a potential transaction have reached their final stages, people with knowledge of the matter have said.

“The accelerated traction of Chinese companies listed in the U.S. looking to go private relate to their outlook in weighing the advantages and disadvantages of maintaining a U.S. listing status, particularly compliance costs and legal risks,” said Christopher Ma, a consultant at law firm Simmons & Simmons in Hong Kong.

Growing tensions between Beijing and Washington are also prompting increasing numbers of U.S.-listed Chinese firms to consider alternative venues to sell shares. So far Hong Kong is the favored destination for secondary listings, with NetEase Inc. and JD.com Inc. being the latest to raise money there. In China, the securities regulator is accelerating a shake-up that could streamline applications process for initial public offerings.

58.com may eventually seek a listing in China after completing the privatization later this year, according to Bloomberg Intelligence analysts Vey-Sern Ling and Tiffany Tam. Such a move could see the company follow the footsteps of firms that had returned to mainland China after delisting in the U.S., such as Focus Media Information Technology Co.

“Once privatized, these Chinese companies and their new owners will no doubt be pivoting towards Hong Kong and the mainland if a future relisting is ever on the cards again,” said Mayer Brown’s Tran.