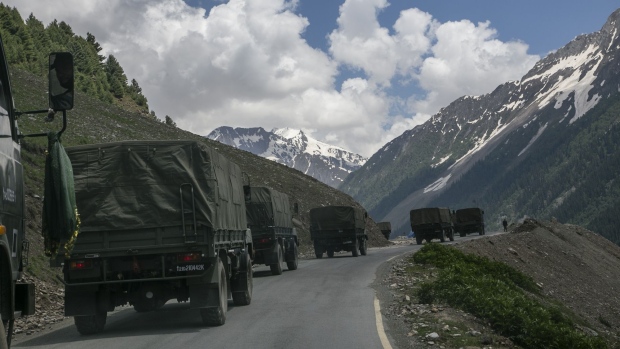 LADAKH, INDIA - JUNE 13: An Indian army convoy, carrying reinforcements and supplies, travels towards Leh through Zoji La, a high mountain pass bordering China on June 13, 2021 in Ladakh, India. The Zoji La mountain pass, considered to be the world's second most dangerous pass at 3529 metres, connects Kashmir Valley and Ladakh. Infrastructural developments along the borders have been ramped up amid the ongoing military tensions with China. (Photo by Yawar Nazir/Getty Images) , Photographer: Yawar Nazir/Getty Images AsiaPac

(Bloomberg) -- China and India said military commanders from both sides had “constructive” talks about their border dispute, in a joint statement that suggested the rivals had found some common ground after more than a year of tensions.

Commanders agreed to maintain momentum in negotiations and resolve the remaining issues in an “expeditious manner,” according to the statement issued late Monday after the 12th round of such talks. “The two sides had a candid and in-depth exchange of views on resolution of remaining areas related to disengagement” along their disputed frontier in the Western Himalayan region, it said.

The nuclear-armed neighbors have been locked in a standoff along their disputed 3,488 kilometer (2,170 mile) border for more than a year. At least 20 Indian and four Chinese soldiers were killed last June in one of the most violent clashes between the two sides in more than four decades and New Delhi recently redirected an additional 50,000 troops to its northern frontier.

In February, soldiers pulled back from Pangong Tso -- a glacial lake some 4,270 meters (14,000 feet) above sea level -- setting up a demilitarized zone that neither side patrols. The current talks could decide on similar pull-backs in other hotly contested zones.

Soldiers from both sides are still in rifle range of each other at several points along their high-altitude frontier. Disagreements over the sequence of withdrawing troops, tanks and artillery pieces from areas of dispute has slowed progress in talks.