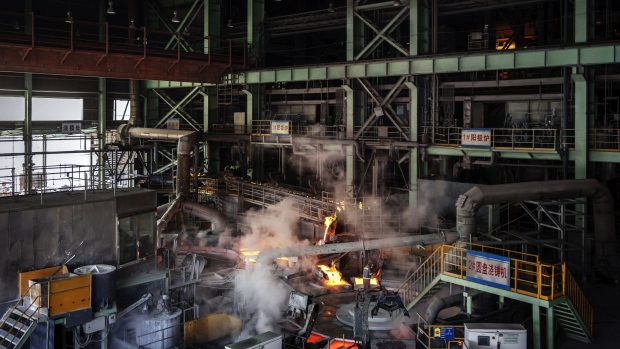 (Bloomberg) -- Profits at industrial firms in China shrank in the first eight months of the year as producer prices slowed, adding to economic challenges including Covid disruptions and a continued property slump.

Industrial profits fell 2.1% in the January-to-August period compared to a year earlier, data from the National Bureau of Statistics showed Tuesday. That compared with a decline of 1.1% in the first seven months of the year.

The NBS did not release single-month data for August. But Zhu Hong, a senior statistician at the NBS, said in a statement that August’s decrease in profits narrowed from a month earlier.

“However, profits are still on the decline and production and operation costs remain high,” she said, adding that the “foundations of recovery in profits is not solid in the face of many exterior uncertainties.”

Tuesday’s figures came after China’s producer price inflation slowed in August to 2.3% from a year ago, according to data released earlier this month. PPI, which is strongly correlated with industrial profits, has been dragged by falling commodity prices and production disruptions, which in August were in part attributable to power shortages.

Slowing inflation means some businesses may have more trouble passing on the cost of goods, which can cut into their margins. Official data showed the mining industry’s profit gains took a significant hit -- slowing to 88.1% year-to-date, compared to a 105.3% gain in the first seven months of the year.

“Sluggish demand is the most outstanding among the three pressures of contracting demand, supply chain shocks and weakening expectations that are weighing on the economy,” said Bruce Pang, chief economist and head of research for Greater China at Jones Lang LaSalle Inc. “Effective demand is still insufficient. Policy makers in the future should pay attention to expanding and supporting effective demand.”

“Earnings should remain under pressure as producer price inflation continues to decelerate, while turmoil in the housing market and draconian Covid Zero restrictions limit the recovery in production.”

Profits at foreign firms remained weak, down 12% in the first eight months of 2022. However, Zhu said the sector is showing signs of a rebound. That figure was a slight improvement from the first seven months, when profits were down 14.5%.

Private firms, meanwhile, saw their profits sink 8.3% year-to-date, while those of state-owned enterprises were up 5.4%.

The economy has also suffered from sporadic Covid curbs as the government continues to respond to outbreaks with its tough Covid Zero strategy intended to stop the spread of the virus.

There have been some signs of improvement, though, as Beijing recently rolled out stimulus measures to counter the slowdown. Industrial production and other indicators grew faster than expected last month. However, most economists believe any recovery remains fragile. Rebounds can stall should curbs to contain the virus tighten, as has happened this year in economic hubs such as Shanghai and Chengdu.

Even should the government ease restrictions, economists warn that a likely spike in infections could continue to disrupt economic activity.

(Updates throughout with additional data and context.)