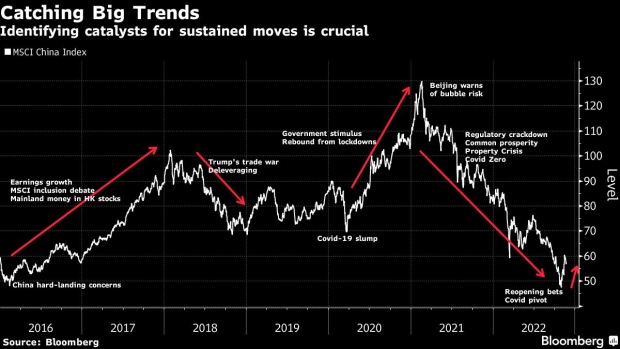 A healthcare worker in personal protective equipment (PPE) at a swab collection station for Covid-19 test in Shanghai, China, on Sunday, Nov. 6, 2022. China will “unswervingly” adhere to its current Covid controls as the country faces increasingly serious outbreaks, health officials said, damping hopes that Beijing will ease its stringent policies that have put cities and factories under prolonged lockdowns. Photographer: Qilai Shen/Bloomberg , Bloomberg

(Bloomberg) -- With Chinese markets prone to sharp turning points followed by long and powerful trends, timing when to buy is almost as important as choosing what to purchase.

Investors who jumped into Chinese stocks on Nov. 11 when Beijing cut Covid-19 quarantine periods and dialed back testing have shared in a rally that’s added almost $370 billion to the value of equities in the MSCI China Index.

Others are still waiting for clearer signals after Wall Street got it so wrong this time last year. Goldman Sachs Group Inc., JPMorgan Chase & Co. and BlackRock Inc. were among those who recommended piling into the market then, only to see more than $4 trillion in value destroyed over the 10 months through October.

“Chinese policies are like a giant freight train coming down the track,” said John Lin, a fund manager for China equities at AllianceBernstein in Singapore. “What you do first is get out of the way. Don’t stay on the track! Then the instant that you can, jump onto the train.”

China’s benchmark CSI 300 Index has risen about 8% from this year’s low set in late October even as Covid cases have been rising. Daily infections climbed above 30,000 for the first time Thursday as officials struggle to contain outbreaks that have triggered new restrictions in some of the largest cities.

Abrdn Plc is among those who already see opportunities in the nation’s corporate bonds after the Covid policy changes and a sweeping package of measures to aid the property sector.

Investors can also position right away to take advantage of a likely steepening in China’s government bond yield curve as the economy reopens from Covid, according to Ray Sharma-Ong, a fund manager for multi-asset and investment solutions at abrdn.

“Go along on the front-end of the curve while going short on the back-end,” Sharma-Ong said. A better outlook for growth will push up back-end rates, while China’s supportive monetary policy will contain front-end rates, he said.

Dollar-denominated Chinese corporate bonds already offer opportunities with yields around 8%, he said. Investing in local currency corporate debt comes with a bonus of 2% positive carry after investors hedge back the yuan to the dollar, according to Sharma-Ong, who expects the yuan to keep strengthening.

“We are very close to trough valuations and very, very close to trough assumptions on earnings as well,” said Bill Maldonado, chief investment officer at Eastspring, which oversees $222 billion. “You’d be buying now and expecting things to kind of rebound on a three-to-six-month basis.”

Catherine Yeung, investment director at Fidelity International, said so much negative newsflow has already been factored into the price of Chinese stocks that the worst is likely over for investors.

For those still on the sidelines, a Politburo meeting in early December, followed by the annual Central Economic Work Conference, may offer useful signals.

Jason Liu at Deutsche Bank AG’s international private bank plans to keep an eye on state media around this time. News from the closed-door work conference, which will bring policymakers together to review the economy this year and set goals and tasks for 2023, may be a catalyst for further re-opening trades.

“We may see some signals from the top leadership,” said Liu, who expects near-term volatility in Chinese assets and a “very gradual” shift away from Covid Zero over the next few quarters.

Liu recommends looking past the likely choppiness and taking a broad position in Chinese equities, including the technology sector, to benefit from a gradual shift in sentiment.

He also sees the yuan as attractive given likely appreciation through the first half of next year. Liu doesn’t recommend credit at the moment, saying it may take longer for the property market to improve.

Morgan Stanley is among those with high hopes for an acceleration of China’s economic opening in spring, when the weather turns more friendly, vaccinations may increase and the National People’s Congress in March looms as a key event for market-moving developments.

Investors who have been underweight in Chinese assets may shift to neutral around this time, according to Andrew Sheets, chief cross-asset strategist at Morgan Stanley.

China’s domestically-focused consumer companies stand to benefit, according to the investment bank.

“If investors are presented with a pausing Fed and China reopening, and growth being stronger in the second half of 2023, I think they’ll view that as a positive backdrop for a lot of different emerging-market assets,” Sheets said.

Reopening of the economy from Covid may drive a positive swing of inflows into China’s equities in 2023 equivalent to 1% of gross domestic product, according to Bloomberg macro strategist Simon Flint. This in turn will buoy the yuan, he said.

AllianceBernstein sees stocks in energy and technology security as low-hanging fruit for investors, so long as the companies are aligned with the government’s goals.

The market has changed from the era before the pandemic and the regulatory crackdown, when investors would hunt for the latest tech and biotech darlings “and then watch the money grow 10 times, 100 times,” AllianceBernstein’s Lin said. “Now you can still find growth, but it has to be policy-sensitive kind of search.”