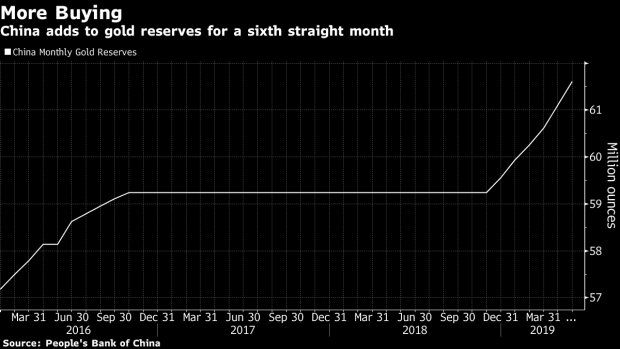 Liquid gold flows from a furnace into individual casting molds to create 28 kilogram gold bars in the foundry at the South Deep gold mine, operated by Gold Fields Ltd., in Westonaria, South Africa, on Thursday, March 9, 2017. South Deep is the world's largest gold deposit after Grasberg in Indonesia, makes up 60 percent of the company's reserves and the miner says it's capable of producing for 70 years. Photographer: Waldo Swiegers/Bloomberg , Bloomberg

(Bloomberg) -- China extended its gold-buying spree, adding to reserves for a sixth straight month, as the protracted trade war with the U.S. hurts growth expectations and boosts demand for a portfolio diversifier.

The People’s Bank of China increased its bullion reserves to 61.61 million ounces in May from 61.10 million a month earlier, according to data released on Monday. In tonnage terms that’s a rise of 15.86 tons, after almost 58 tons of gold were added to the nation’s stockpile in the five months to April.

The rise reflects the government’s “determined diversification” away from dollar assets, Argonaut Securities (Asia) Ltd. analyst Helen Lau said, adding that retail demand has also picked up. At this rate of accumulation, China could buy 150 tons in 2019, according to Lau.

China, the world’s top gold producer and consumer, is facing the prospect of a slowing domestic economy as the Trump administration raised tariffs on Chinese imports and looked to cut off companies such as Huawei Technologies Co. from the U.S. market. The latest PBOC data signal that China has resumed buying at a steady pace after a pause from late 2016 to last December.

“It’s a diversification away from the U.S. dollar, particularly given the trade tensions and the potential technology cold war that’s evolving,” said Bart Melek, global head of commodity strategy at TD Securities. “We have to remember that gold is nobody’s liability.”

Bullion prices have risen for the past three weeks, hitting the highest level since April 2018, as investors seek out havens and traders increase bets that the Federal Reserve will cut interest rates following signs of weakness. Spot gold was at $1,329.60 on Monday, after climbing 1.7% in May.

China has previously gone long periods without revealing increases in gold holdings. When the central bank announced a 57% jump in reserves to 53.3 million ounces in mid-2015, it was the first update in six years.

The PBOC’s move comes as other central banks, especially from emerging markets, increase bullion holdings. First-quarter purchases were the highest in six years, according to the World Gold Council.

--With assistance from Krystal Chia.