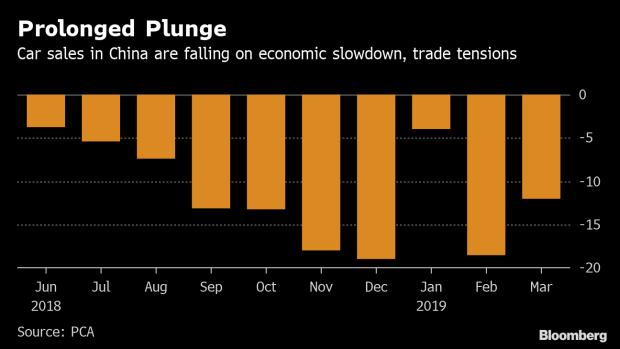 (Bloomberg) -- China’s economic planner is drafting a series of stimulus measures to bolster sales of cars and electronics, according to people familiar with the matter.

The draft includes subsidies for new-energy vehicles, smartphones and home appliances, said the people, who asked not to be named because they aren’t authorized to discuss the plan. The proposals are at a consultation stage with other government branches, and there is no guarantee that they’ll be approved, the people said. The National Development and Reform Commission, which is said to have drafted the plan, didn’t immediately respond to a fax seeking comment.

The move indicates Chinese leaders are stepping up attempts to bolster consumption and mitigate the threats posed by trade tensions with the U.S. The government, which already unveiled its most ambitious tax reduction in years, is seeing some signs its efforts are bearing fruit: retail sales expanded 8.7 percent in March to beat expectations, and first-quarter gross domestic product expanded more than economists estimated.

Speculation over the stimulus swirled in the markets Wednesday, pushing up shares of domestic carmakers such as BYD Co. and automakers in Europe. The Stoxx Europe 600 Automobiles & Parts Index rose 1.5 percent to an intraday high, led by Volkswagen AG, Daimler AG and Faurecia SA.

It’s notoriously difficult to own a car in major Chinese cities because of quotas put in place to tackle traffic congestion and air pollution. In Beijing, the annual new vehicle quota dropped to 100,000 in 2018, and each licensed gasoline-fueled car has to be idle one day a week. That’s prompted the government to provide incentives for motorists to drive new-energy vehicles -- including pure-battery electrics, plug-in hybrids and fuel-cell cars.

Existing ownership restrictions have hindered the growth of car sales, Cui Dongshu, secretary-general of the China Passenger Car Association, said in February. In Beijing and Shanghai, for example, drivers wanting a license plate for a gasoline-powered car must enter a years-long lottery or pay as much as 90,000 yuan.

China’s auto market has been shrinking for months as it goes through its worst slump in a generation. Also, sales during the first half of this year are seeing downward pressure because a cut in purchasing taxes in 2016 and 2017 prompted many consumers to buy vehicles sooner than planned, John Zeng, managing director of LMC Automotive Shanghai, said in February.

(Updates with background on auto sales starting in sixth paragraph.)

To contact Bloomberg News staff for this story: Steven Yang in Beijing at kyang74@bloomberg.net;Jeanny Yu in Hong Kong at jyu107@bloomberg.net