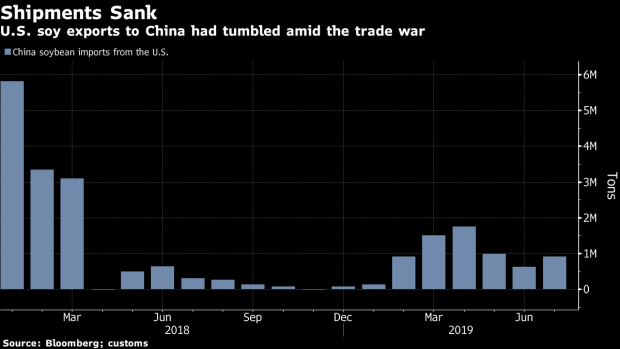 (Bloomberg) -- China may allow companies to resume purchases of U.S. agricultural products in a show of goodwill ahead of upcoming face-to-face trade talks between the two countries, according to people familiar with the situation.

The government is considering whether to permit renewed imports of American farm goods including soybeans and pork, though purchases are yet to be made and the volumes are still undecided, the people said. China had halted U.S. farm-product imports in August after negotiations deteriorated.

Any goodwill purchases would come just as President Donald Trump said he was postponing the imposition of 5% extra tariffs on Chinese goods by two weeks, signs that the two sides may be more willing to negotiate as officials prepare to meet in Washington in the coming weeks.

Earlier on Wednesday, China announced a range of U.S. goods to be exempted from 25% extra tariffs put in place last year, as the government seeks to ease the impact from the trade war. While that move may create some good will in Washington, China is keeping the pressure on U.S. agricultural exports produced in key Trump-supporting states.

To contact the editors responsible for this story: Anna Kitanaka at akitanaka@bloomberg.net, Alexander Kwiatkowski