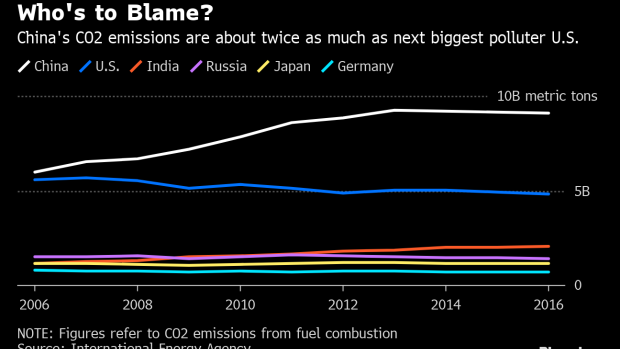 (Bloomberg) -- A bureaucratic reshuffle has left China months behind in its preparation to launch a national carbon market, potentially slowing efforts to restrain greenhouse gas emissions by the world’s biggest polluter.

The delays in the initial phase of development are due to a regulatory restructuring last year that saw responsibility for the carbon market moved to the new environment ministry, according to an adviser to the Chinese government on climate change policies. Despite the hiccup, the nation should still be able to meet its 2020 launch target, according to the adviser, Ma Aimin.

“The first phase was slower than originally planned,” said Ma, deputy director-general of the National Center for Climate Change Strategy & International Cooperation. With the reshaping of ministries largely completed, “China is pushing ahead efforts to develop the national carbon market in a steady manner.”

The environmental ministry didn’t reply to a fax seeking comment.

China’s use of financial markets to help cut greenhouse gases is expected to result in the world’s biggest market for trading carbon emissions. The program will force utilities to buy permits to pollute as a means to balance the nation’s campaign against climate change with rising electricity demand from its 1.4 billion people.

The Ministry of Ecology & Environment took over climate duties from the National Development & Reform Commission when it was created in March 2018 as part of a major government overhaul. The consolidation of staff and functions, particularly at the provincial level, dragged on until the start of 2019, according to Ma.

A bureaucratic shift of that size would “unavoidably have some impact on the progress of building a carbon market,” said Zhao Xiaolu, a China Climate Initiative manager at Environmental Defense Fund, a global non-profit organization. “The government restructuring wasn’t anticipated when the work plan timeline was released.”

Policy makers outlined in 2017 a three-step process toward creating the market. The first phase, which was supposed to last about a year, would be focused on developing systems for data reporting, registration and trading. The second stage, which would also take a year, focused on mock trading of carbon credits to test the effectiveness and reliability of the market. Spot trading would follow in the third and final step.

Regulators were still seeking feedback as of last week on draft trading rules, which were originally scheduled to be finalized by the end of last year.

The outcome of China’s emissions trading system is being closely watched by businesses and governments as its massive scale could shape global trends and spur a faster transition toward clean energy. The market, covering 1,700 companies across the power sector, has the potential to manage about a quarter of the world’s carbon emissions.

China is also drawing lessons from other regions, including the European Union, whose carbon market was up and running in about three years from the time it was proposed, according to Liu Shuang, a program director at Energy Foundation China, which provides grants to projects that support sustainable energy development.

A lack of accurate data led to a surplus of allowances on the European market, which kept prices depressed for years. Lawmakers revamped the system last year and it’s now expected to keep the cost of pollution on an upward trajectory through 2030.

--With assistance from Jason Rogers.