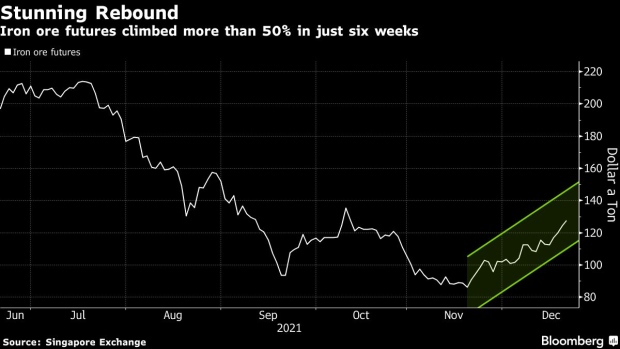 China Huaneng Group Co.’s 200-megawatt unit 1 reactor at Shidao Bay is now feeding power to the grid in Shandong province, the China Nuclear Energy Association said in a WeChat post. A second reactor is undergoing tests before being connected and putting the plant into full commercial operations in the middle of next year.

The plant is the world’s first pebble-bed modular high-temperature gas-cooled reactor, heating up helium instead of water to produce power. It’s a so-called fourth generation reactor, designed to shut down passively if something goes wrong -- in contrast to active systems that may not be able to trigger safety measures if power fails, which is what happened at the Fukushima Daiichi accident in Japan a decade ago.

No country in the world is investing in nuclear power like China, which is expected to pour as much as $440 billion into new plants over the next decade and a half and overtake the U.S. as the top generator of nuclear electricity.

At 200 megawatts, the small module reactors -- or SMRs -- are about one-fifth the size of China’s first homegrown reactor design, known as Hualong One. It’s that size, and the flexibility and cost savings it promises, that have nuclear experts most excited about SMRs. The U.S., U.K. and Russia are also in advanced stages of manufacturing the technology, according to Fitch Solutions.

In a future electricity system dominated by wind and solar generation, smaller reactors will be better placed than the behemoths of the past to balance out the intermittency of renewable energy sources, according to Wood Mackenzie Ltd. And because of their size and safety features, they can be built at a central facility and delivered to where the generation is needed, potentially allowing for economies of scale to develop to bring down construction costs.

“SMRs should be less costly to build and operate, faster to implement and have shorter shutdown times during refueling than traditional nuclear plants,” Jefferies analyst Bolor Enkhbaatar said in a Dec. 20 research note.

If the technology develops, they could even be dropped into the boilers of existing coal power plants, turning the world’s biggest polluters into clean energy sources, according to the World Nuclear Association.

There’s still a long way to go to reach that point. For reactors to be cheap, they need to be built quickly, and it’s taken Huaneng nearly a decade to complete the Shidao Bay project. The final price tag of the project hasn’t been disclosed.

Still, the power coursing through Shandong this morning is another piece of evidence that China’s bet on nuclear power is paying off.

Iron ore extended its storming rebound from an 18-month low as moves in China to support its embattled real estate sector bolstered the demand outlook. Authorities are encouraging banks to fund acquisitions of projects of distressed developers and pushing financially healthy property firms to make such purchases. In addition, domestic banks lowered borrowing costs for the first time in 20 months.