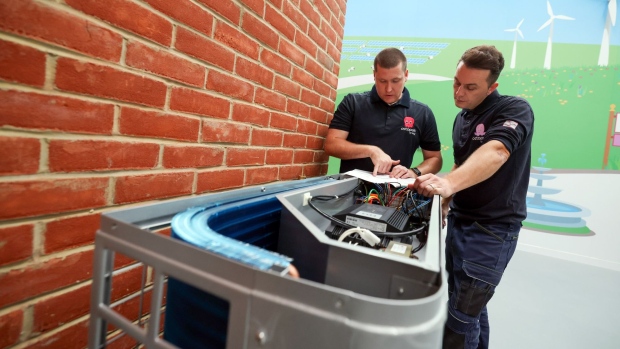 Engineers work on installing an Ecoforest heat pump at the Octopus Energy Ltd.'s training and R&D centre in Slough, U.K., on Tuesday, Sept. 28, 2021. Octopus, backed by Al Gore's sustainability fund, is helping teach the plumbers to install heat pumps that will play a pivotal role in the U.K.’s strategy to have net-zero emissions by 2050. , Bloomberg

(Bloomberg) -- Europe’s shift away from gas has been getting all the attention, but the world’s biggest market for new heat pump sales is China, according to a new report from the International Energy Agency.

“China has the most installers, since much of the building stock, particularly in the south of the country, relies on heat pumps for both cooling in the summer and heating in the winter,” the report notes.

While air-source heat pumps, which extract warmth from the air to heat water for radiators or underfloor heating, are the most popular variety around the world, in China ground-source heat pumps are often used to replace historically dominant coal-based heating systems. Ground-source heat pumps work by absorbing heat from the ground, rather than the air. They tend to be more expensive and disruptive to install, but are more efficient to run.

Both the European Union and North America rely heavily on natural gas for domestic heating. China’s largest single source is currently district heating networks, where a central source is used to heat or cool multiple buildings. Home heating systems tend to be dominated by electricity, coal and natural gas.

Overall around 10% of building heating globally was provided by heat pumps last year.

Read More:  Here’s How a Heat Pump Can Cool Your House in the Summer

The European energy crisis sparked by Russia’s invasion of Ukraine is expected to lead to even faster heat-pump adoption in the EU moving forward, as multiple countries attempt to reduce their reliance on Russian fossil fuels. In some European countries, including Poland, the Netherlands and Italy, heat pump sales doubled in the first half of 2022 over the same period a year ago.

“Heat pumps are an indispensable part of any plan to cut emissions and natural gas use, and an urgent priority in the European Union today,” said IEA Executive Director Fatih Birol in a press release.

While both Europe and China are moving towards heat pumps as part of decarbonization plans, China has also been attempting to reduce its reliance on coal for domestic heating to improve air quality. Raw coal frequently burned to heat homes, particularly in northern China, is cheap but highly polluting, and contributes to poor winter air quality. The government has rolled out a series of initiatives to subsidize electric heating, and China’s reliance on coal for heating in buildings has halved in the past five years, IEA data show.