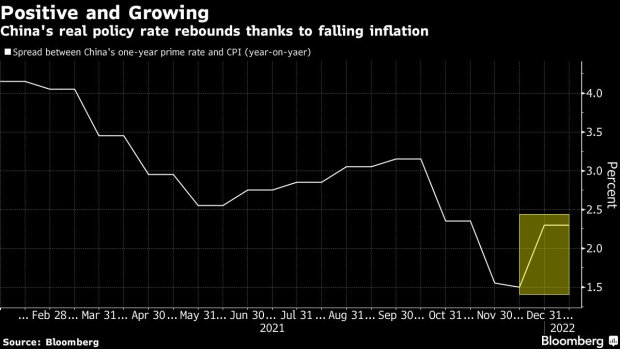 (Bloomberg) -- China has emerged as the biggest winner in the first set of inflation reports from emerging markets this year, with slowing price growth making it an oasis of positive returns in a group beset with deepening negative real rates.

Of the 16 developing nations that reported their latest consumer-price indexes in the past week, only four showed a decline, while nine posted an acceleration and three revealed a mixed picture. Among them, China was the only country to boast inflation that’s already well below benchmark borrowing costs and falling faster than expected.

Inflation has become the key differentiator in emerging markets just when global investors are reassessing their exposure to riskier assets before an anticipated tightening by the Federal Reserve. As many as 34 of the 42 developing nations tracked by Bloomberg have negative real rates. Worsening data show their fight against prices has a long way to go despite hundreds of basis points of rate hikes from Russia to Brazil.

“China’s December inflation data delivered a positive surprise,” said Mitul Kotecha, the chief emerging Asia and Europe strategist at TD Securities. “We expect CPI in China to remain well controlled. Compared to some other EMs where inflation remains problematic in Latam and EMEA, the outlook is favorable.”

A Bloomberg gauge shows emerging-market inflation fell to an average 3.37% in the fourth quarter of 2021, from 3.66% in June-September. That’s mostly thanks to China, which dominates the index that gives weights to member countries based on their gross domestic product.

The latest reports also showed slowing inflation in Brazil, Hungary and Ukraine. However, in the first two countries, the readings missed estimates. Ukraine reported a faster-than-forecast decline but failed to benefit from it as the geopolitical conflict involving Russia sent the nation’s bonds tumbling to the lowest level since March 2020.

In India, the second-biggest emerging economy, inflation jumped to 5.59% in December, sending the adjusted policy rate to minus 1.59%, a full percentage point worse than this time last year. The country’s central bank hasn’t raised benchmark rates since June 2018, but traders are forecasting a move in February.

Brazil increased its policy rate by 725 basis points last year, but has reported double-digit inflation for four successive months. That means the real rate is still a minus 0.81%.

But the biggest disappointment came from Russia. While the country’s 425 basis-point tightening in 2021 has made it a darling of bond and currency investors, data for early January showed inflation is resurgent. Consumer-price growth more than doubled in the Jan. 1-10 period from the week ended Dec. 27 as public transport and food became more expensive. Annual inflation is steady at 8.39%, leaving a marginal positive rate.

Meanwhile, inflation accelerated in the Czech Republic, touted to have the most hawkish central bank in eastern Europe. Saudi Arabia, Argentina, Romania and Egypt also reported rising prices. In Africa, Angola’s inflation topped 27%, while Ghana’s 12.6% growth in December was the quickest in almost five years.

“Persistent inflation along with strained fiscal positions and a hawkish Fed threaten a spiral from inflation to wider macro-stability risks,” said Vishnu Varathan, head of economics and strategy at Mizuho Bank Ltd. “This is making investors a lot more wary about emerging-market local bonds, given the risks to real returns.”