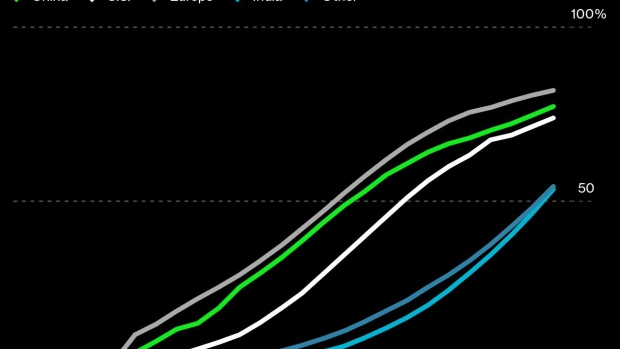 “There are nine million bicycles in Beijing, that’s a fact.” The opening lyrics to that 2005 hit song was a conservative estimate back then, and today millions of those bicycles have been replaced by planet-warming cars.

It’s a source of emissions that the Chinese government has vowed to tackle, but there’s a risk that even the world’s largest national electric vehicle market is growing too slowly. China’s car sector is falling short of the country’s target to reach net-zero by 2060, according to a report released this month by Greenpeace.

Under current policies, the industry’s emissions will peak in 2027 at 1.75 billion tons of carbon dioxide and decrease 11% from that peak by 2035. But that pollution will need to fall by at least 20% instead to be in line with the 2060 carbon neutrality target, according to Greenpeace.

To achieve that, 63% of total car sales in China would have to be zero-emission by the end of the decade, with that share rising to 87% by 2035. That’s higher than the country’s current target of having 40% of new vehicles be electric or run on clean energy — including  biogas — by 2030, while EVs should be the “mainstream” by 2035.

Chinese automakers should completely phase out internal combustion engine vehicles by 2030, according to Greenpeace. Anything later than that won’t be enough to meet the Paris Agreement’s stretch goal of limiting global warming to 1.5°C, said Bao Hang, a project leader at Greenpeace East Asia’s Beijing office. “Right now carmakers in China are far behind,” he said.

Only two foreign companies have set specific targets for their share of EV sales in China by 2030, according to the Greenpeace study, and both fall short of the 2060 net-zero goal. Volkswagen aims to have half of all sales be EVs by the end of the decade while Honda is seeking to have 40% of sales be either electric or fuel-cell vehicles by then. None of China’s major carmakers have set numerical 2030 goals for zero-emission cars.

The transportation sector accounts for 7% of China’s total greenhouse gas emissions. That’s lower than most developed countries, but China’s challenge is that its car market is growing much more rapidly. The car ownership rate in China is about 180 per 1,000 people compared with about 600 in the European Union. If China reaches the same motorization rate as the EU has now, it will have 500 million more vehicles by mid-century.

Greening the transportation sector is listed as one of the ten “major tasks” in China's official roadmap for capping the growth in carbon emissions before 2030. The first guidelines laying out details of President Xi Jinping’s climate goals says that by the end of the decade “green travel” will account for at least 70% of trips in cities with more than 1 million people and oil demand from land transportation will have peaked.

Developing the EV market will be a key part of those plans. China’s stunning EV sales figures often overshadow the fact that the Asian nation also has the world’s largest fleet of fossil-fuel vehicles — one that will continue to grow despite the government’s policies to promote EVs.

While the EU proposed an effective ban on the sale of new petrol and diesel cars from 2035 and the U.K. will prohibit new petrol and diesel cars from 2030, China hasn’t put forward similar timelines to end demand for fossil fuel vehicles. At the COP26 climate talks in Glasgow in November, China and the U.S., the world’s two biggest car markets, declined to sign a pledge to only sell zero-emissions cars and vans by 2035.

“Cutting emissions is cumulative,” said Bao from Greenpeace. “The longer you wait, the more impossible it becomes.”