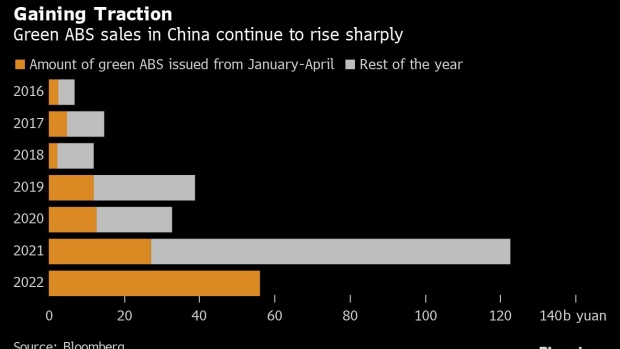 Turbines at a wind farm near Golmud, Qinghai province, China, on Saturday, Sept. 11, 2021. China is opening up its market for trading green energy, making it easier for multinationals from BMW AG to Airbus SE to buy wind and solar power and reach aggressive emissions goals. , Bloomberg

(Bloomberg) -- An alternative kind of environmental debt continues to gain momentum in China, one with looser standards than traditional green bonds.

Sales of green asset-backed securities, which package together assets that generate income, totaled 56.1 billion yuan ($8.4 billion) the first four months of 2022, according to data compiled by Bloomberg. It’s the second-straight year that issuance more than doubled in those months.

These securities can be considered green even if the funds raised aren’t used for green projects, so long as the seller “operates in a green industry” or the underlying income stream comes from a green venture, according to the Shanghai Stock Exchange. That flexibility is making it a popular option for borrowers because, by contrast, bonds can only be classified as green if proceeds are used for green projects, said Gao Huike, a senior research director at CSCI Pengyuan Credit Rating Co., Ltd.

China’s green debt market has boomed in recent years as firms rush to meet President Xi Jinping’s ambitious carbon-neutrality targets. Its $168 billion green bond market has quickly become one of the largest in the world, prompting concern about its fragmented environmental-debt frameworks and differing standards to other nations. Its green ABS market, totaling about $31 billion, remains small by comparison.

Consistent frameworks and better reporting of data is crucial in sustaining the growth of green ABS issuance in China, according to Tracy Wan, a senior director at Fitch Ratings. Some key information for investors to better understand green features, such as emissions data for auto ABS, isn’t publicized in China but is available in Europe, Wan said. She added while use-of-proceeds data are provided to third parties that certify green labels at the transaction level, the information isn’t available to investors.