China's economy surges in Q1 as consumer spending picks up

China’s economy strengthened in the first quarter of the year as consumer spending rose more than expected, putting it on course to join the U.S. as twin engines for a global recovery in 2021.

Gross domestic product climbed 18.3 per cent in the first quarter from a year earlier, largely in line with the 18.5 per cent predicted in a Bloomberg survey of economists, though that record-breaking figure was mainly due to comparisons with a year ago when much of the economy was shut due to coronavirus. Retail sales beat expectations while industrial output growth moderated.

The latest data puts China on course to grow well above its annual target of more than 6 per cent, supporting the view that China and the U.S., where economists predict 6.2 per cent growth, will both outperform other major nations this year. China’s recovery hasn’t yet plateaued after it became the first major economy to contain the spread of coronavirus and return to growth, with GDP rising 0.6 per cent in the first three months of 2021 from the previous quarter.

The recovery last year was led by strong investment in real estate and infrastructure spurring demand for industrial goods, while overseas orders for medical goods and electronic devices fueled exports. Consumer spending had lagged, but the latest figures showed a turnaround. Retail sales growth was 6.3 per cent in March when calculated on a two-year average growth basis -- which removes distortions created by last year’s lockdowns -- up sharply from the rates seen last year.

“We are seeing a bit more balanced recovery in the Chinese economy,” Wang Tao, chief China economist at UBS AG, said in an interview with Bloomberg TV. “That early pickup in construction industry is going to give way to more household consumption,” she added. Consumer spending at restaurants and sales of discretionary goods such as jewelry, alcohol and tobacco led the growth of retail sales in March.

The economy was also boosted by a jump in investment from overseas. Inbound investment into China rose almost 40% to $45 billion in the first three months of 2021, according to data from the Ministry of Commerce released Thursday. That was the highest for that period in comparable data back to 2002.

Markets were choppy following the data release but ended the day little changed, with the benchmark CSI 300 Index paring an earlier loss of as much as 0.6 per cent to finish up 0.35 per cent for the day. The yield on benchmark 10-year sovereign debt fell slightly to 3.16 per cent. The onshore yuan was unchanged on the day at 6.5226 per dollar.

Broadening out the recovery remains a work in progress with growth in the first quarter still reliant on the property sector. Fixed-asset investment in real estate rose 7.6 per cent on a two-year average growth basis and infrastructure spending increased roughly in-line with pre-pandemic rates. Quarterly steel production of 271 million tons suggests that annual output is on course to top 1 billion tons for the second year running.

The undershoot in GDP growth relative to expectations and lopsided nature of the recovery do not warrant any economy-wide shift in monetary policy, in our view.

Looking forward, production is poised to start peaking, while demand should pick up further. This should add more balance in what looks to be a steady recovery ahead.

Although Beijing has promised “no sharp turns” in monetary and fiscal support this year, some prominent economists have warned that premature tightening could still put the recovery at risk. The central bank has asked banks to curtail loan growth in coming months as it seeks to control credit to curb asset bubbles. Alongside the investment data, data showing home prices grew at the fastest pace in seven months in March will likely prompt more action by Chinese policy makers to rein in the sector.

“Considering the robust recovery, we certainly do not expect Beijing to step up easing measures, but it is also unlikely to make a sharp shift in its policy stance,” Nomura economists led by Lu Ting wrote in a note. Authorities have learned lessons from a “forceful deleveraging campaign” in 2017-18, which led to bond defaults, a stock market selloff and weaker growth, they said.

The statistics bureau said Friday inflation is expected to remain in a moderate range this year, and while rising commodity costs could boost domestic prices, there’s no basis for prices in upstream sectors to rise significantly.

“The economy is far from overheating,” said Bruce Pang, head of macro and strategy research at China Renaissance Securities Hong Kong Ltd. “The consumer sector doesn’t have a solid basis for overheating, and I don’t think the central bank will take a faster turn for monetary policy.”

Bloomberg Economics forecasts global GDP growth of 6.9 per cent in 2021, rapid enough to bring output substantially back onto its pre-Covid path. Data released Thursday showed the U.S. economy’s comeback is firing on all cylinders, with retail sales exceeding pre-pandemic levels in all categories except restaurants. Production at U.S. factories increased in March by the most in eight months. 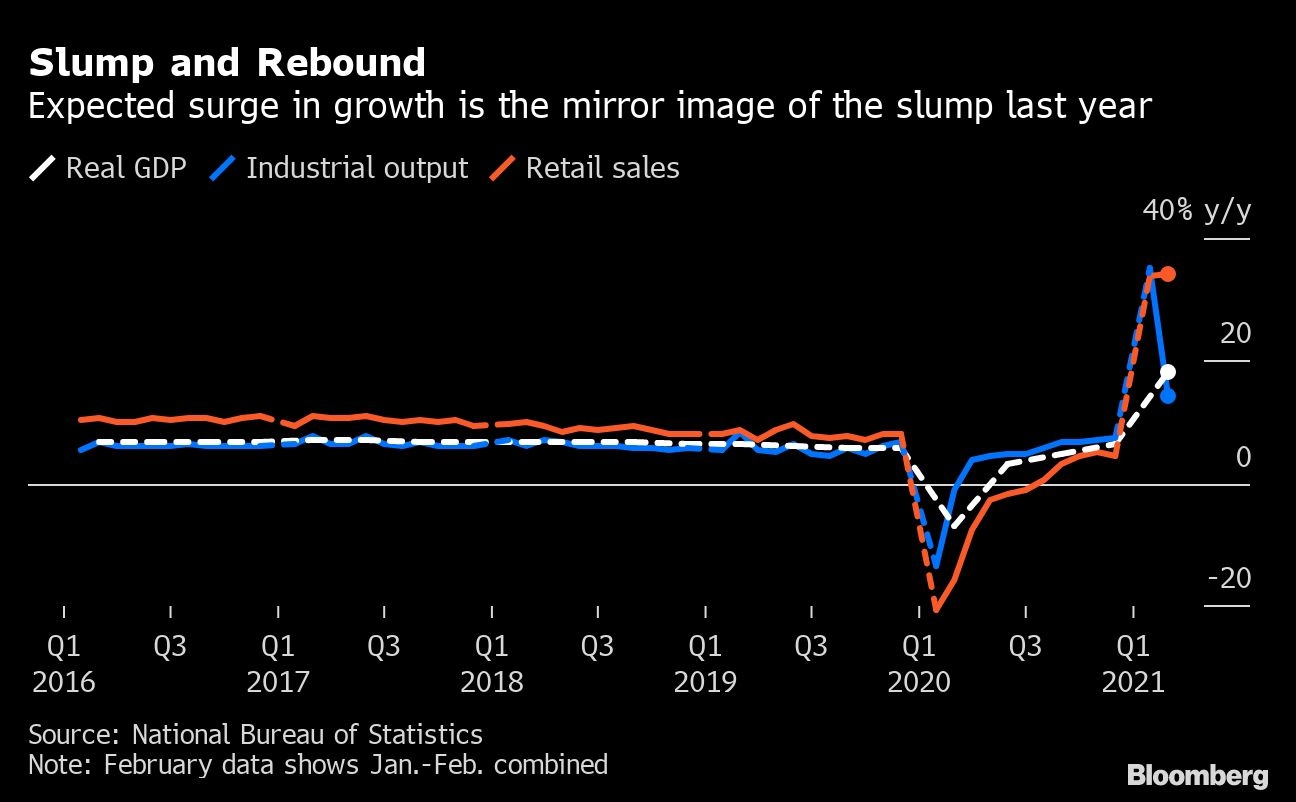 China has rapidly accelerated its vaccination campaign over the past month in a move that should help bolster spending on services. A recovery in major economies fueled by vaccine roll-outs and the Biden administration’s massive fiscal stimulus is expected to sustain rapid growth in Chinese exports this year.

“We expect the economy to continue to gain momentum in the second quarter, with a rotation in terms of the drivers of growth compared to last year,” said Louis Kuijs, head of Asia Economics at Oxford Economics Ltd. in Hong Kong. “Less generous fiscal and monetary policy will weigh on infrastructure and real estate investment, while improved profitability and confidence should buoy corporate investment and consumption.”