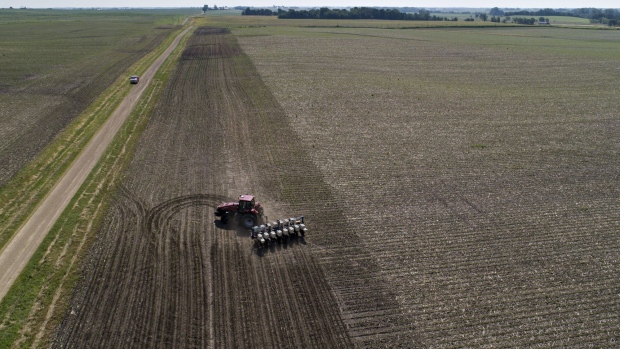 A farmer pulls a planter through a soybean field in this aerial photograph taken over a farm near Buda, Illinois, U.S., on Tuesday, July 2, 2019. The USDA's World Agricultural Supply and Demand Estimates (WASDE) report is scheduled for release on July 11. Photographer: Daniel Acker/Bloomberg , Bloomberg

State-run and private buyers have purchased at least 10 cargoes this month, with three being sold overnight, according to people familiar with the matter, who asked not to be named because the deals are private. China will need the supply and U.S. prices are attractive for cargoes delivered after the harvest.

The deals offer respite to markets concerned about the return of trade disruptions as the countries have been exchanging blows over everything from the origins of the coronavirus to new security legislation in Hong Kong. The chief financial officer of Archer-Daniels-Midland Co., one of the world’s top agriculture commodity traders, said the phase one deal is still “on track.”

“There was a recent speculation that maybe China kind of ordered their state-run enterprises or stop buying, well, the reality of matters, we -- the same week, we’ve been actually receiving orders in terms of shipping products over to China,” CFO Ray Young said Wednesday at a Stifel virtual conference. “So our counsel to people is that let’s look at the facts, and let’s avoid the speculation.”

Chinese purchases have been mainly for shipment in October and November, while the three cargoes sold overnight were for December, according to the people. State-run enterprises have been buying soybeans mostly for loading at ports in the Pacific Northwest, while private soybean processors in China have favored the Gulf of Mexico, the people said.

China pledged to buy $36.5 billion in American agricultural goods in 2020, but has only purchased $4.65 billion in the first four months of the year, fueling speculation coronavirus disruptions mean it can no longer meet its phase one obligations. ADM’s Young said he is expecting a “very strong” fourth quarter for U.S. exports to China.

“When we talk to different officials within both sides of the governments, right, whether it be the U.S. side and the China side, clearly, there’s a commitment towards making sure that we honor the phase one part of the trade agreement, particularly the agricultural commitments,” he said. “My viewpoint is that U.S.-China trade, we still believe this is on track.”

Chinese crushers need more soybeans for the fourth quarter and early next year as supplies from Brazil dwindle (SEASONALLY?).

“There’s still a need for China to bring in agricultural products,” Young said. “Their economy is recovering, right? They do need to bring in more soybeans.” He added that the country would also need meat as its pork herd is still recovering from African swine fever, a disease that decimated the Chinese herd.