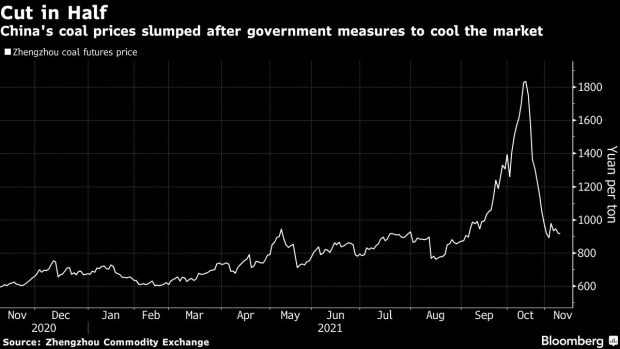 (Bloomberg) -- Beijing is maintaining pressure on coal miners to cut prices to keep a power crisis at bay as a burst of frigid weather provides a hint of the harsh winter that may be ahead.

Some coal mines in Shanxi province, the top producing region last year, have capped the price of 5,500-NAR grade coal at the pithead to 900 yuan ($141) a ton, after being required to do so by the National Development and Reform Commission, according to traders and analysts who asked not to be identified as they aren’t authorized to speak publicly.

The new cap is 25% lower than a previous limit set in the province two weeks ago. Still, it’s substantially higher than a 528-yuan ceiling the NDRC was considering last month. The economic planning agency may no longer push for the lower level after resistance from miners, the people said.

The planning body didn’t respond to a phone call and a fax inquiry from Bloomberg News.

China has taken several measures to intervene in the coal market after prices surged to a record, engulfing the world’s second-largest economy in an energy crisis that sparked a blackout and power rationing. Beijing pushed state-backed miners to accelerate coal output, stepped up purchases of overseas supplies and scrapped measures meant to keep electricity prices low.

The interventions have worked, with coal prices plummeting in recent weeks as domestic mines ramp up output. Benchmark coal futures on the Zhengzhou Commodity Exchange have fallen by half since hitting a record Oct. 19.

The country’s two main grid operators have said in recent days that the power crisis has largely ended, though curtailments continue for some high-consuming, heavy-polluting industries in selected provinces. Still, a “tight balance with partial gaps” is expected in the power market through the winter and spring, State Grid Corp. of China said Sunday.

That could be exacerbated by colder-than-normal temperatures this winter thanks to the La Nina weather phenomenon. A severe cold wave inundated large swathes of China with heavy snowfall, posing challenges to farming and transportation, including of coal.

Tongliao City in Inner Mongolia, home to one of the country’s largest open-pit mines, has been walloped by the strongest snowstorm ever recorded, Xinhua news reported. Most of the city’s primary and middle schools and kindergartens have suspended classes as of Monday, while local airport runways have been shut down and highways are under temporary traffic controls.