China has ordered all travel agencies to suspend sales of domestic and international tours as part of an effort to contain the spread of a novel coronavirus that has killed 25 and sickened hundreds.

The Ministry of Culture and Tourism ordered travel agencies and tourism companies to stop selling tour packages beginning Friday, according to a document seen by Bloomberg.

The action comes at the start of the Lunar New Year holidays, when millions of Chinese travel across the country and abroad. China is taking extraordinary measures as it tries to halt a disease that some fear could rival SARS. 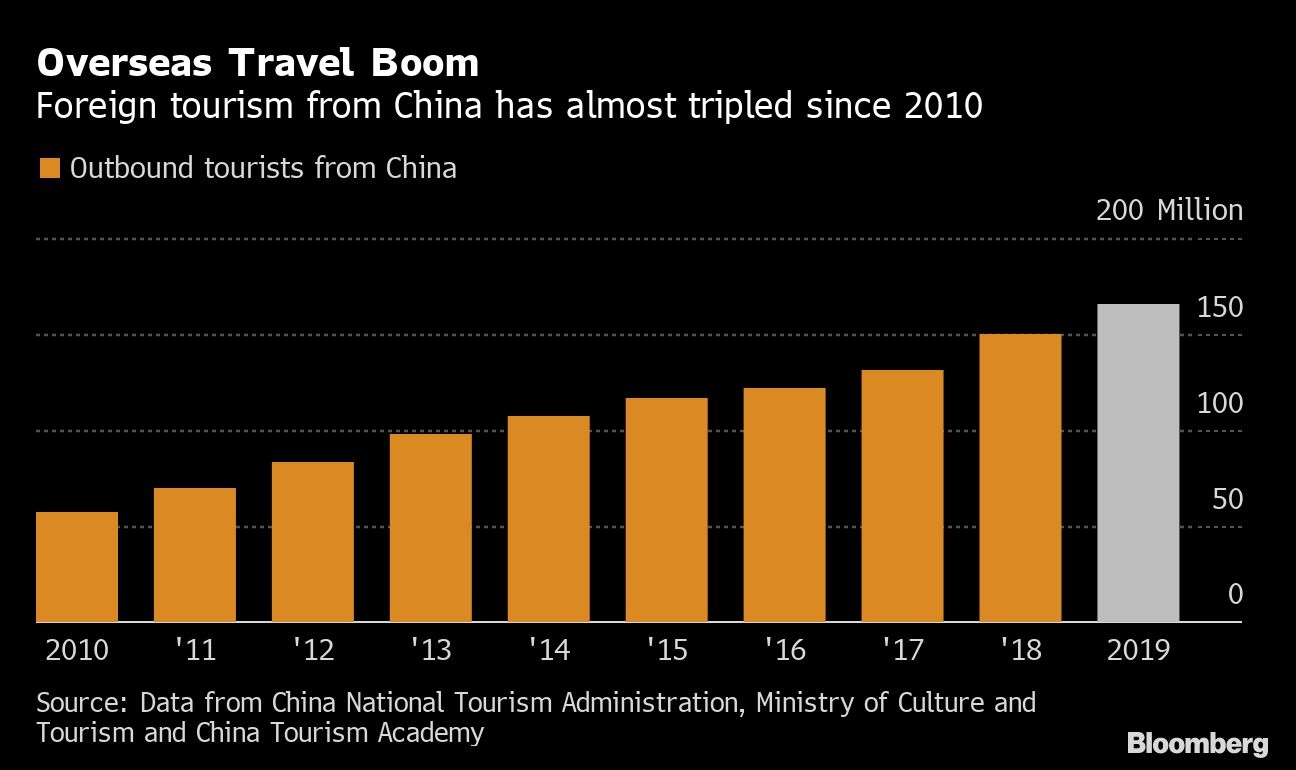 The move will be a significant blow to the industry. Chinese tourists, the biggest source of outbound travellers worldwide, spent US$130 billion overseas in 2018.

While globally more tourists have been arranging their own travel, taking advantage of no-frills airlines and internet booking sites, more than half of China’s overseas travellers — 55 per cent in 2018 — still choose packages, according to the China Tourism Academy.

In addition to tour operators such as China International Travel Service Corp. and UTour Group Co., the local airline industry will be hurt by the suspension. Air China Ltd., China Southern Airlines Co. and China Eastern Airlines Corp.’s shares have taken a hit since the virus outbreak. Air China could be most vulnerable because of its outsized exposure to international traffic, Bloomberg Intelligence analyst James Teo wrote in a note earlier this week.

The economic impact could be broader, because Chinese tourists are also the world’s biggest spenders on luxury goods, snapping up everything from fancy watches to handbags on overseas trips.

Jitters over the effects of the virus on Chinese consumers’ high-end outlays contributed to a slump in shares of Remy Cointreau SA on Friday after the Cognac maker ditched its financial forecasts.

New West End Co., an industry body representing 600 businesses in one of London’s prime retail districts, estimates that Chinese customers will spend about 17 million pounds (US$22 million) there during the Lunar New Year period, up from 16 million pounds the prior year. Jace Tyrrell, chief executive officer of the organization, said most Chinese tourists planning visits for the holiday had already travelled to the U.K. before any restrictions were imposed.

“If Chinese tourist numbers were to fall in the medium term, we would have to wait and see what the impact was,” he said. “The Chinese are the most important shoppers in London’s West End as they spend an average 1,800 pounds per transaction. They are now our No. 1 shopper by value, having overtaken the Middle Eastern shopper.”

Any sustained drop in tourism from the Asian country could have a serious impact on Britain’s retail and leisure industries. Data from Global Blue SA, which provides tax-free shopping services, said Chinese consumers accounted for just over a quarter of all retail transactions in the U.K. last year.

--With assistance from Sarah Chen, Charlotte Ryan and Deirdre Hipwell.