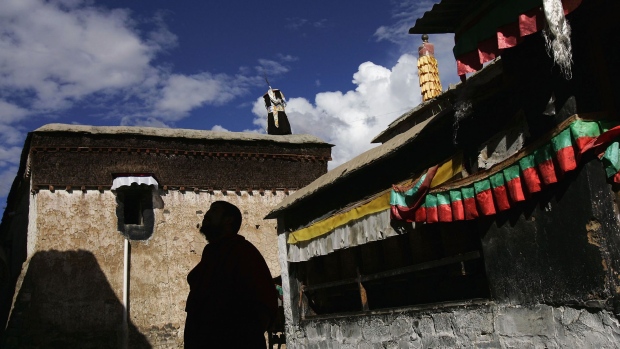 SHIGATSE, CHINA - AUGUST 30: (CHINA OUT) A monk looks on at the Tashilhunpo Monastery on August 30, 2006 in Shigatse of Tibet Autonomous Region, China. Chinese tourists are flooding into Tibet this summer with the recently completed Qinghai-Tibet railway bringing an extra 3,000 people a day into Tibet. Critics say that it could threaten the cultural and even the physical landscape of the fragile Tibetan plateau and accelerate Lhasa's changing face as it continues to expand into a modern Chinese city. Expensive hotels and shops have opened in the new section of Lhasa while the Tibetan quarter fights to hold onto its cultural image, according to reports. (Photo by China Photos/Getty Images) , Photographer: China Photos/Getty Images AsiaPac

(Bloomberg) -- China is imposing a new round of lockdowns as vacation hotspots become ensnared in its drive to suppress Covid-19, with parts of Tibet’s capital shut down and thousands of tourists stuck on the tropical island of Hainan.

After living most of the pandemic virtually virus-free, the mountainous region of Tibet reported an outbreak that rapidly grew from four to 22 cases on Monday, according to local authorities. The second-largest city of Shigatse was locked down for three days, CCTV reported, along with areas deemed mid- and high-risk for the virus in Lhasa, the capital.

The crackdown in Tibet -- which before Sunday had only a single Covid case, back in 2020, and has emerged as a popular vacation spot for Chinese visitors -- comes as authorities try to stamp out a larger outbreak in Hainan, an island province in China’s south known for its beaches and duty-free shopping.

China reported a total of 828 local infections for Monday, with 471 coming from Hainan. The national number has doubled since Thursday.

At least four cities on Hainan have been locked down amid an outbreak that’s grown to more than 1,500 cases since the first infections emerged at the start of August. As of Saturday, some 25,000 tourists were stuck in hotels in the beach-side city of Sanya, with flights and other forms of transportation canceled to help contain the spread. Frequent rounds of mass testing are now being undertaken to root out cases, in line with China’s Covid Zero playbook.

The outbreaks are a severe blow to China’s summer holiday tourism market, which was booming as major cities such as Shanghai eased domestic travel restrictions after containing Covid earlier this year. Flight searches in the first two weeks of July returned to the pre-pandemic levels, while hotel inquiries rose to 70% of 2019 levels, according to a report released by Trip.com.

Hainan is now bracing for a wave of cancellations, with major travel platforms including Trip.com helping tourists get refunds, according to the company. It’s also helping them get a 50% cut on room rates while they are stranded.

In Sanya, one of the country’s top 10 holiday destinations where demand for hotels and flights were exceeding pre-pandemic levels, some 30 Chinese airlines have introduced specific policies for ticket refunds or rebookings, local media including Caijing reported.

Hainan is working to achieve zero new community cases by Friday, officials said, which means eliminating infections found outside of the quarantine system. That’s typically been used as a benchmark throughout China for an easing of Covid controls.

Local media outlet Hainan Daily reported a tropical depression in the area will bring heavy rain and strong winds that could disrupt the delivery of supplies and anti-epidemic equipment, as well as make mass testing more difficult.

Elsewhere, Xinjiang’s cases more than doubled in a day, with 146 infections reported on Monday amid an influx of tourists that had pushed hotel bookings to 95% of pre-pandemic levels. Local officials said the region averaged 980,000 visitors a day between July 30 and Aug. 7 and more testing stations are being set up to service travelers and facilitate their departure if needed.

The situation underscores the difficulty of maintaining China’s zero-tolerance approach to Covid in the face of more infectious omicron sub-variants. An outbreak in Shanghai earlier this year was brought under control by a hardline two-month lockdown that confined the financial hub’s 25 million residents to their homes, only to now see cases continue to flare up in other regions.

Nevertheless, President Xi Jinping has recommitted to the approach, saying the nation won’t pursue “herd immunity” like other countries because it would exact too much of a toll, particularly on China’s elderly, who have lower vaccination rates. The result is that China has become isolated as the rest of the world lives with the virus, and frequent lockdowns, restrictions and mass testing efforts are disrupting the economy, despite moves to mitigate the blow in recent months.

State news agency Xinhua published a commentary Monday outlining China’s economic achievements, such as a record trade surplus and low inflation, under Xi’s directive of Covid Zero. The approach is correct and the Communist Party can’t become complacent in the fight against the virus, the report said, repeating a line the Chinese leader made at a May political meeting.

(Updates to add tourism impact in sixth through eighth paragraphs)