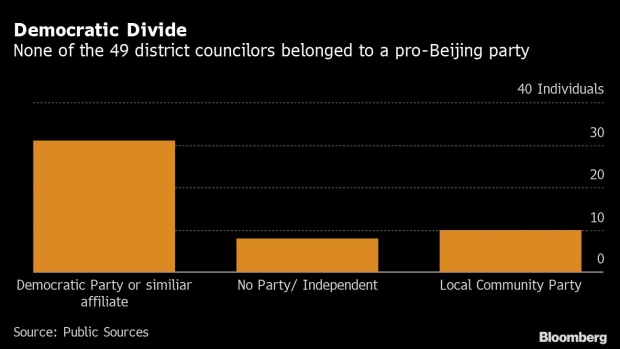 Members of a pro-government group known as Chinese Hearts pose for photographs with the Chinese national flag as they celebrate National Day in Hong Kong, China, on Friday, Oct. 1, 2021. Hong Kong is putting more police on its streets during this year’s National Day celebrations than it did for the same holiday during historic unrest two years ago, evidence of the laser focus authorities are placing on eliminating any sign of dissent in the financial hub. Photographer: Paul Yeung/Bloomberg , Bloomberg

(Bloomberg) -- A loyalty pledge to China has pushed nearly three-fourths of Hong Kong’s largest group of directly elected officials out of office, as Beijing’s campaign for greater control of the city quashes political opposition.

Of the nearly 200 district councilors who took the new oath 49 were deemed to have made invalid pledges, according to government statements on the ceremonies held between Sept. 10 and Oct. 8. None of the councilors were from pro-government groups.

Their ouster comes after 278 local representatives resigned in protest over new rules introduced in May that gave the government power to unseat those whose pledges were deemed invalid. Adding the latest group being effectively disqualified, 72% of those elected are no longer serving.

Councilors won’t be able to retake the oath, the government said in a Thursday statement without clarifying why their pledges had been discounted. “The oath taker must sincerely believe in and strictly abide by the relevant oath prescribed by law,” it added.

Failed oath-takers face the threat of prosecution and demands to repay their office expenses.

District Council seats have been in the government’s crosshairs since a vote almost two years ago saw pro-democracy groups win 85% of available seats, shaking China’s confidence that it could guarantee loyalist control of the government. Beijing subsequently overhauled the city’s electoral system, mandating that Hong Kong lawmakers be “patriots” -- a concept local lawmakers rolled out to lower levels of government.

“These retroactive and targeted disqualifications, based on the Hong Kong authorities’ arbitrary determination that these district councilors’ loyalty oaths are invalid, prevent people in Hong Kong from participating meaningfully in their own governance,” U.S. State Department spokesman Ned Price said in a statement Thursday.

His comments were echoed by the European Union, which said in a statement the councilors’ exclusion “weakens Hong Kong’s democratic governance structure.”

It was unclear how the District Council would operate with so many vacant seats, but Hong Kong Chief Executive Carrie Lam said such issues would be dealt with after the ceremonies, in a weekly press conference on Oct. 5.

There are 479 District Council seats in Hong Kong, 452 of which are directly elected while 27 are appointed members of rural committees.