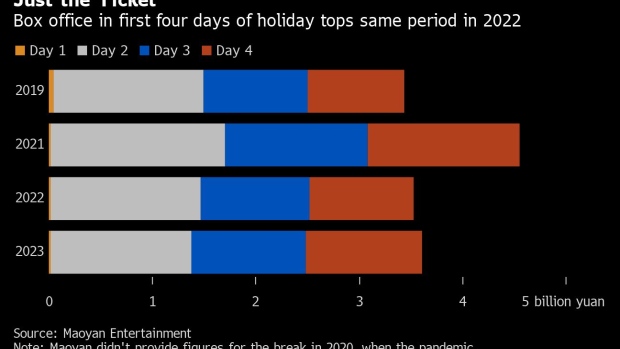 Consumption figures during Lunar New Year — the most important holiday in China, with hundreds of millions of people traveling home to see family — are closely watched as a barometer of economic recovery in the world’s most populous country.

About 95.9 million trips were made by road, rail, air and waterways during the first four days of the week-long public holiday, which began Saturday, according to Bloomberg calculations from data released by the Ministry of Transport. That’s a daily average of roughly 24 million trips, compared with an average of just 18.6 million over the course of the week in 2022.

Box office during the first four days of the holiday totaled 3.62 billion yuan ($533 million), according to figures from online ticketing platform Maoyan Entertainment. That’s higher than the 3.5 billion yuan recorded during the same period last year and the 3.4 billion in 2019, before the pandemic.

Outbound air ticket bookings more than quadrupled year-on-year and reservations doubled at overseas hotels, according to the report. Hong Kong and Macau are the top destinations for Chinese tourists, followed by Bangkok and Singapore, it said.

Chinese consumers traveled and took in entertainment by the tens of millions despite a surge in infections and deaths across the country in the wake of Covid Zero, which had seen major cities locked down and the border all but shut as the government battled to keep the virus at bay. With its reopening, people are free to see their families and resume normal life for the first time in years.

Consumption is expected to lead a rebound in economic activity this year, after infections peak. China’s economy grew at its second-slowest pace since the 1970s in 2022, due to disruptions caused by Covid outbreaks and lockdowns forced on major cities alongside a historic property slump.

The early holiday receipts could fuel optimism that overall economic recovery will be faster than anticipated.

Economists surveyed by Bloomberg have upgraded their forecasts for China’s growth to 5.1% for this year and 5% for 2024, up from 4.8% and 4.9%, respectively, in a December poll.

(Updates with tourism data in paragraphs six and seven.)