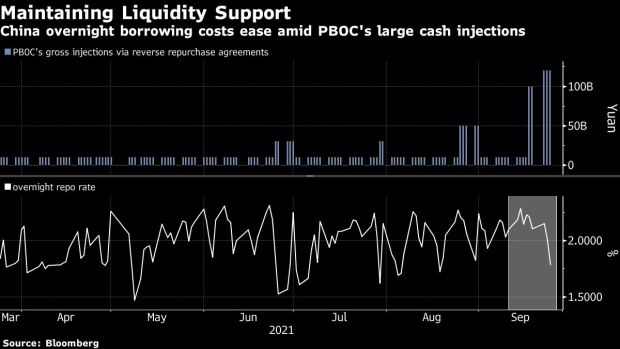 The People’s Bank of China pumped 120 billion yuan ($18.6 billion) into the banking system with reverse repurchase agreements, resulting in a net injection of 70 billion yuan. While Friday’s net addition was smaller than the amounts seen in the previous four days, it underscored the authorities’ intent to avoid systemic stress as Evergrande’s debt woes hurt sentiment.

Beijing has stepped up efforts to shore up confidence after the property developer’s debt problems jolted global markets. The PBOC added the most cash into the system since January on Thursday, and financial regulators have encouraged the firm to take all measures possible to avoid a near-term default on its dollar bonds.

Authorities tend to loosen their grip on liquidity toward the end of the quarter due to increased demand for cash from banks for regulatory checks. Lenders also need to hoard more funds ahead of China’s one-week holiday at the start of October.

The overnight repurchase rate, an indicator of short-term interbank borrowing costs, slid as much as 26 basis points to 1.74% on Friday, the lowest in more than a month. The rate on the seven-day tenor climbed 10 basis points.