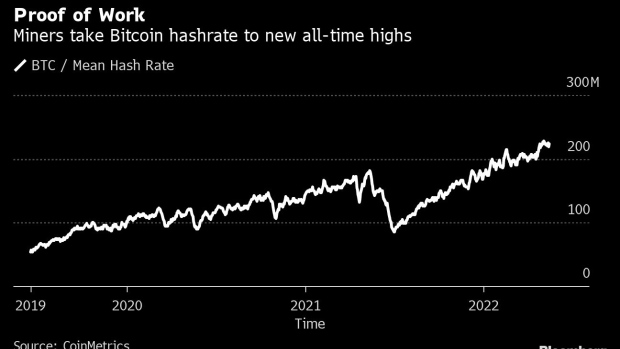 Power cords for bitcoin mining machines are plugged into electrical outlets at a mining facility operated by Bitmain Technologies Ltd. in Ordos, Inner Mongolia, China, on Friday, Aug. 11, 2017. Bitmain is one of the leading producers of bitcoin-mining equipment and also runs Antpool, a processing pool that combines individual miners from China and other countries, in addition to operating one of the largest digital currency mines in the world. Photographer: Qilai Shen/Bloomberg , Bloomberg

(Bloomberg) -- While the US extended its leading position as the dominant location for Bitcoin mining, China has reemerged as the second-largest locale despite a government ban on the activity last year.

The US accounted for 37.84% of global hashrate, a measure of computing power used to extract the digital currency, between September 2021 to January, according to the Cambridge Centre for Alternative Finance, in a report released on Tuesday. The hashrate, also responsible for securing the Bitcoin network, has made a strong comeback to new highs after falling last year.

Following the mining ban in China last year, the country has seen a sudden surge in activity through “covert mining operations” and has “re-emerged as a major mining hub” grabbing 21.11% of global hashrate, according to the CCAF.

“This strongly suggests that significant underground mining activity has formed in the country, which empirically confirms what industry insiders have long been assuming,” CCAF wrote in the report. In May (2021), Beijing intensified its efforts to curb the cryptocurrency market. It seems covert mining is still happening in China through routed through virtual private networks that make it appear the computers are operating in another country.

While covert mining operations may be a cause of this resurgence, CCAF’s methodology, which is based on aggregating geolocation data given by partner mining pools, is prone to errors as many miners miners might hide their identity using proxy services like VPNs.

Kazakhstan was third at 13.22%, followed by Canada taking 6.48% of global hashrate.  Russia accounted for 4.66%, and has seen cryptocurrency mining operations relegated elsewhere, said the report.