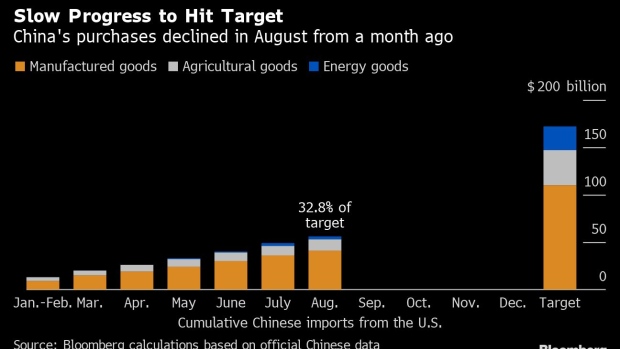 A vessel loaded with shipping containers is docked at the Yangshan Deepwater Port in this aerial photograph taken in Shanghai, China, on Sunday, July 12, 2020. U.S. President Donald Trump said Friday a phase two trade deal with China isn't under consideration, saying the relationship between Washington and Beijing has deteriorated too much. Photographer: Qilai Shen/Bloomberg , Bloomberg

(Bloomberg) -- China reduced the pace of its purchases of U.S. goods in August, making slow progress in meeting the goals of its trade deal with the world’s biggest economy.

The value of U.S. goods bought by China declined from the previous month, led by a slowdown in energy products, according to Bloomberg calculations based on Customs Administration data. By the end of August, China had purchased about 32.8% of the full-year target of more than $170 billion -- meaning it must buy about $115 billion of goods in the remaining four months of the year to comply with the agreement signed in January.

Purchases of energy products fell by 24% in August from the previous month, hitting about 14% of the full-year target. While China’s crude oil imports from the U.S. dropped substantially from a record high in July, they are likely to rise in coming months as purchases of American crude rose before the August review of the trade deal.

The U.S. and China reaffirmed their commitment to the phase-one trade deal in August, demonstrating a willingness to cooperate even as tensions rise over a range of issues.

China cut its pork imports from the U.S. by nearly 40% in August from a month earlier, while increasing its purchases of cereals, the data showed. Imports of soybeans, one of the key products in the trade deal, rose almost 300% from a month earlier and are likely to trend higher as the U.S. harvest picks up.

The August data is based on the latest revised data.