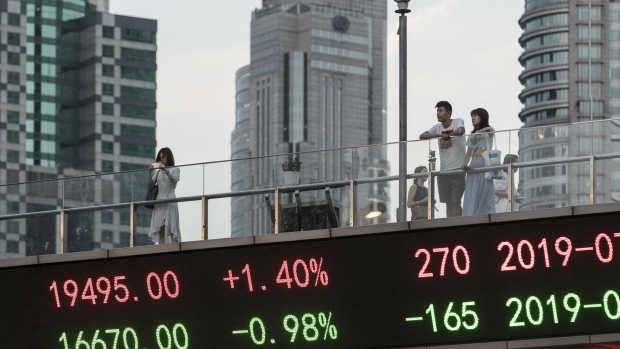 ​Citigroup Inc. has termed it the most extreme potential American move against China in the escalating rivalry between the world’s largest two economies: restricting access to U.S. finance.

Traders in China’s markets will have to decide how to price that risk on Monday -- just before the start of a week-long holiday -- after Bloomberg reported the Trump administration is discussing ways to limit the use of American money going to Chinese entities. The MSCI China Index fell 1.6 per cent on Friday.

U.S. investment in China’s domestic markets are limited -- residents had US$203 billion of long-term mainland Chinese financial assets as of June, little more than double that held in South Africa, according to the U.S. Treasury. Far bigger is the US$1.2 trillion market capitalization of Chinese companies on three key U.S. exchanges as of February, according to a report by the U.S.-China Economic and Security Review Commission.

"It obviously adds yet another layer of uncertainty and does not bode well for a positive outcome for coming trade negotiations," said Amir Anvarzadeh, a market strategist at Asymmetric Advisors Pte. in Singapore. "It will force Chinese firms to relist in Hong Kong and China."

While China has sought to increase the attractiveness of its stock and bond markets, to Chinese firms seeking capital as well as to global funds looking to diversify, the reliance of companies including Alibaba Group Holding Ltd. on foreign exchanges exposes a vulnerability. Just this month, the country removed a hurdle for foreign investment into its stock and bond markets almost 20 years after it first allowed access.

Shifting all those listings home would pose major strains for the onshore financial system. China has itself launched a new market to encourage its technology companies to list at home. The so-called Star board in Shanghai was designed with looser trading rules in part so China’s startups would pick mainland exchanges over those in the U.S. or Hong Kong, although the buzz among investors has recently started to fade.

The news on discussions in Washington, based on people familiar with the internal deliberations, will hit at a time when U.S.-China trade tensions have been less of a challenge for domestic equities. The Shanghai Composite Index was up 1.6 per cent for the month of September as of Friday.

Monday will be traders’ last chance to act on the new risk before a prolonged market closure to mark the 70th anniversary of the Communist Party taking power. Exchanges will then be shut until Oct. 8.

There’s no indication that any moves by the U.S. are imminent, and bilateral high-level trade talks with China are still scheduled for next week. But Friday’s reports showcase the danger of a new front in the two countries’ confrontation.

Proposed U.S. legislation that aims to de-list foreign companies from American stock exchanges that violate accounting and oversight rules, if passed, could “have a profound impact” for the more than 200 Chinese companies trading on U.S. exchanges, Citigroup economist Cesar Rojas wrote in a report last month titled “The Most Extreme U.S. Potential Retaliation: Blocking China’s access to U.S. (financial) markets.”

Any wholesale shift of Chinese initial public offerings to Hong Kong and China would hurt “new economy” enterprises because the “U.S. capital market is much deeper,” Bank of America Corp. strategists led by David Cui wrote in June.

Another risk: the two countries engage in a currency war as China promotes global use of the yuan, aiming to erode the “strategic advantage” America has with the dollar’s role in the global financial system, Cui and his team wrote.

For now, strategists at Goldman Sachs Group Inc. are keeping their near-term target for the yuan to drop to 7.2 per dollar. That’s “in light of renewed uncertainty around portfolio flows,” along with the expectation that the U.S. proceeds with the next round of tariff hikes as scheduled on Oct. 15,” Zach Pandl and colleagues wrote in a note Friday.

--With assistance from Keiko Ujikane and Sofia Horta e Costa