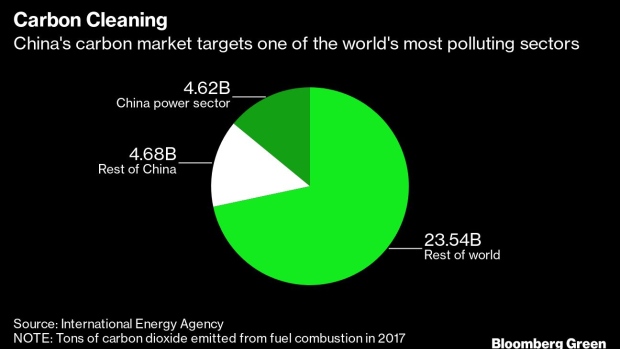 A small motor boat is moored on the banks of a river near a coal-fired power station on the outskirts of Ningbo, Zhejiang Province, China, on Wednesday, April 22, 2020. China's top leaders softened their tone on the importance of reaching specific growth targets this year during the latest Politburo meeting on April 17, saying the nation is facing "unprecedented" economic difficulty and signaling that more stimulus was in the works. Photographer: Qilai Shen/Bloomberg , Bloomberg

(Bloomberg) -- China may delay the launch of its national carbon market for power companies to the first half of 2021, according to a researcher who helped the government design the emissions trading system.

Actual trading of emission allowances will likely begin next year, Zhang Xiliang, director of Tsinghua University’s Institute of Energy, Environment and Economy, said at the International Finance Forum in Guangzhou over the weekend, according to a video of the event. China is still to complete the necessary database for emissions and decide on legislative rules for the market, he said.

The government had set itself a deadline to get trading underway by the end of 2020. That plan was upended by the coronavirus pandemic, which shut down large swathes of the country earlier this year. The epicenter for the disease in China, Hubei province, is also home to the regional carbon exchange that was involved in building the national database.

The Ministry of Ecology and Environment, which will oversee the market, didn’t immediately respond to a faxed request for comment on the potential delay. On Friday it published guidelines for the market that didn’t include a start date.

The world’s top energy consumer is tapping financial market mechanisms to help cut greenhouse gases as it aims to become carbon-neutral by 2060. The national market, which builds on eight regional pilots, will start with power generators and will eventually be expanded to cover seven other industries.

The guidelines, on which the ministry is seeking industry feedback by Nov. 29, cover emissions for 2019 and 2020. Some 2,267 power companies will be obligated to take part. Those firms will be issued a certain number of emission allowances, based on past records, and some will have to purchase extra allowances for any excess pollution.

Cleaner-burning natural gas-fired power plants won’t have to purchase any extra allowances for 2019 and 2020, according to the guidelines, while the maximum amount that coal plants would have to buy will be capped at 20% of their total emissions.

At its outset, the national market is expected to account for more than 3.6 billion tons of carbon emissions a year, compared to 1.6 billion covered by the European Union’s trading system last year. It will eventually cover 6.7 billion tons a year, according to Zhang.