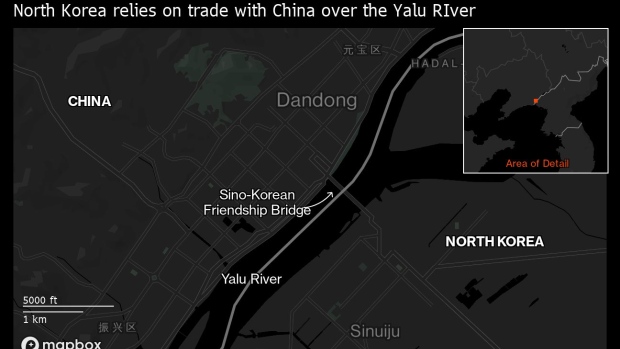 (Bloomberg) -- China is reopening its main train route with North Korea after a five-month hiatus due to Covid, bringing a potential boost to Kim Jong Un’s sanctions-battered economy.

Foreign Ministry spokesman Wang Wenbin said Monday at a regular press briefing in Beijing the cargo rail link between the China and North Korea is reopening, after service was halted in April as part of measures to control Covid.

“The two sides will continue to strengthen coordination to ensure the steady and secure transport of goods, and contribute to friendly relations between China and the DPRK,” Wang said, referring to North Korea by its formal name.

The rail connection between the city of Dandong in China and Sinuiju in North Korea is Kim’s main link to China, his country’s biggest trading partner by far. Reopening the trade route could take pressure off Kim to return to stalled nuclear disarmament talks with the U.S., where the Biden administration is dangling the prospects financial rewards in exchange for steps to wind down its atomic arsenal.

The link was closed in 2020 near the start of the pandemic when Kim shut the borders to prevent the coronavirus from entering, and was briefly reopened in January of this year. Video on social media on Monday showed a freight train that appeared to be crossing from the Chinese side into North Korea.

North Korea’s trade with China, the world’s No. 2 economy, plunged in 2020 when the border was closed, dealing a bigger blow to North Korea than international sanctions to punish it for its nuclear weapons program.

Kim appears to be returning to provocations, with his state on Sunday firing off its first ballistic missile since June. It also is making preparations for its first nuclear test since 2017, the US, Japan and South Korea have said, as Pyongyang seeks to miniaturize warheads for potential tactical strikes and build more powerful weapons for its missiles that could carry a warhead to the US mainland.

Any display of the weapons in Kim’s nuclear arsenal would serve as a reminder of the pressing security problems posed by Pyongyang that have simmered as US President Joe Biden’s administration focused on Russia’s invasion of Ukraine.

The US push to isolate Russia over Vladimir Putin’s war in Ukraine, coupled with increasing Washington’s animosity toward China, has allowed Kim to strengthen his nuclear deterrent without fear of facing more sanctions at the UN Security Council. There’s almost no chance Russia or China, which have veto power at the council, would support any measures against North Korea, as they did in 2017 following a series of weapons tests that prompted former President Donald Trump to warn of “fire and fury.”