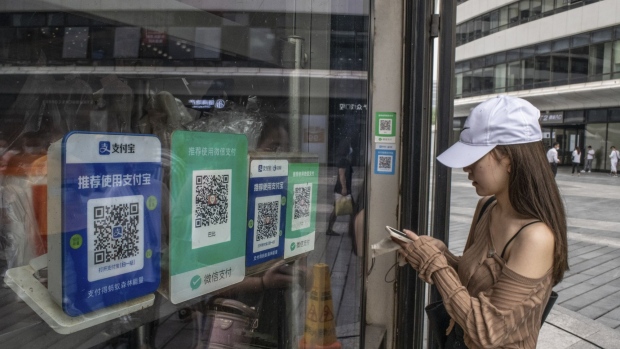 Visitors line up to buy coffees using digital yuan at the China International Fair for Trade in Services (CIFTIS) in Beijing, in Sept. 2021. , Bloomberg

(Bloomberg) -- China is rolling out its digital yuan to athletes and spectators ahead of the Beijing Winter Olympics, the first major test of the virtual currency’s appeal among foreigners.

With less than a month to go before kickoff, and the event already encumbered by diplomatic boycotts and the threat of virus outbreaks, China is looking to use the games to showcase the digital yuan’s clout globally.

Visitors can download an app or get a physical card that stores the digital yuan, or convert foreign bank notes into e-CNY at self-service machines, according to the Bank of China Ltd., a state lender and official partner of the games.

Athletes and their coaches are eligible to get wristbands that act as e-wallets and can be swiped to pay for goods or services.

Whether foreign athletes adopt the digital yuan remains to be seen given heightened political tensions around the games and worries over data risks. Three U.S. Republican Senators in July called on the U.S. Olympic Committee to forbid American athletes from using the digital yuan, citing espionage and data-security concerns.

On a recent morning at one of the BOC’s branches in the Olympic Village in Beijing, a promotional video played on loop on a big screen to showcase the electronic currency.

Convenience stores, cafes and other merchants inside the Olympic Village -- where athletes will be living and spending their free time -- are equipped with machines that take digital yuan payment, as well as shops at railway stations near the game venues.

Qu Songming, a manager of the operations team of the Olympic Village in Beijing, said payment will be restricted to only a few methods. Notably Alibaba Group Holding Ltd.’s Alipay and Tencent Holdings Ltd.’s WeChat Pay -- which both support e-CNY -- won’t be available at the village.

“The only payment methods are renminbi cash, Visa cards and the digital yuan at all of the competition and non-competition venues during the Olympics,” said Qu. Visa Inc. is a sponsor of the games.

The Winter Olympics, which officially begins on Feb. 4, is seen as an opportunity for the People’s Bank of China to raise awareness about the e-CNY after making steady progress with trials at about a dozen regions across the country since 2020.

A total of 140 million individuals had registered for a digital yuan account by early November, according to officials, though residents still overwhelmingly rely on Alipay and WeChat Pay for their daily payments. Both apps support digital yuan payments now, after Tencent launched e-CNY services on WeChat last week. A number of other Internet giants including JD.com Inc., Trip.com Group Ltd. and Meituan also accept e-CNY payment.

China could push for nationwide adoption of the digital yuan for domestic consumption ahead of the Winter Olympics in Beijing in February. The use of the e-yuan in Hong Kong and by trading partners in the long run could lift the yuan’s status as a global reserve and settlement currency.

Although the PBOC has no timetable for an official rollout of the digital currency, it has taken a step closer to that goal last week by releasing a test version of the digital yuan app on iOS and Android stores. Residents in trial zones can download the app and register for an account.

The app allows people to transfer money from bank accounts to the e-wallet, and make or receive payments by scanning a QR code or tapping their phone on a payment device. Previously, consumers could only get a private link to download the e-wallet from bank staff when they applied for an account.

The Bank of China said it’s the first time the app will be made available to foreigners, providing a crucial test of its services.

“It’s a key task and challenge to make sure foreign visitors will have a good experience” with the digital yuan, the bank said in a statement. “We will strive to do a good job to ensure services during the game, and operations, customer service, emergency response and other teams are all in intensive drills and preparations.”