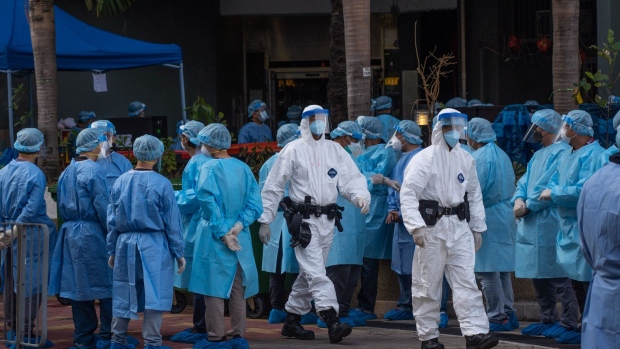 (Bloomberg) -- China has offered Hong Kong help to ramp-up a mass-testing blitz to stem an omicron outbreak in the financial hub, the city’s leader said, adding that broader lockdowns were not yet necessary.

“Guangdong province has expressed to my office that they are happy to render support,” Hong Kong Chief Executive Carrie Lam told reporters at a regular press briefing Tuesday. “So, it’s about considering how we can best utilize their support to help Hong Kong.”

Health officials are struggling to contain a growing cluster of Covid-19 infections at a massive public housing complex where some 226 cases have been discovered in recent days, as the government imposes five-day lockdowns on towers housing thousands of people.

The city is now testing about 150,000 people per day, Lam said, and was considering whether that pace could be increased. “If some help from the mainland is required, this is something we would not turn down,” she said. “After all, we are family.”

When Hong Kong previously relied on the mainland help for a voluntary city-wide campaign that tested more than half a million people in August 2020, some residents feared China might use the testing to collect DNA data -- claims authorities dismissed.

Hong Kong has adopted the same Covid Zero strategy as the mainland, with the goal of eliminating the virus from its borders through a combination of travel curbs, mass testing and long quarantines of close contacts. That approach has been strained in recent weeks after the highly-transmissible omicron variant of the coronavirus began spreading in the city, which has struggled to get its vaccination rate to the desired 90% mark previously touted by Lam.

While a handful of cases in mainland China has plunged cities of millions of people into harsh lockdowns, Hong Kong has diverged preferring a more localized approach that Lam said Tuesday she’d continue. “We don’t think a five-day lockdown is necessary for the other buildings,” she said of the affected complex, adding Hong Kong was unlikely to significantly relax its Covid measures straight after the Lunar New Year break.

When asked why she didn’t wear a mask to her weekly press briefing when officials were now urging residents in high-risk areas of the city to don two facial coverings, Lam said it was “well thought-out behavior.”

“People in Hong Kong have to hear very clearly from the chief executive -- what are the messages that she is conveying to the public?” she said. “Maybe in Hong Kong, they even have to feel my emotions.”

“I’m very somber because I’m very worried,” she added. “Wearing a mask would not allow people to see that for themselves.”