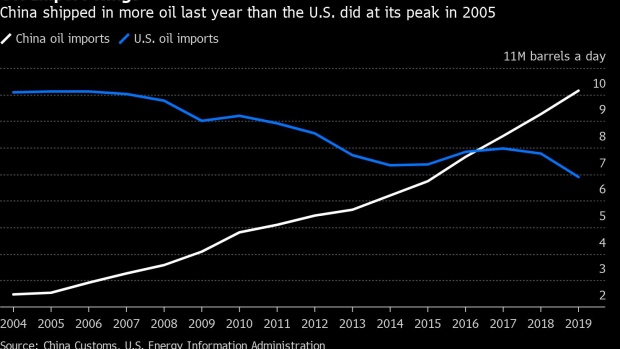 (Bloomberg) -- Chinese oil demand has dropped by about three million barrels a day, or 20% of total consumption, as the coronavirus squeezes the economy, according to people with inside knowledge of the country’s energy industry.

The drop is probably the largest demand shock the oil market has suffered since the global financial crisis of 2008 to 2009, and the most sudden since the Sept. 11 attacks. It could force the hand of the OPEC cartel, which is considering an emergency meeting to cut production and staunch the decline in prices, which are headed for the lowest close in a year.

China is the world’s largest oil importer, after surpassing the U.S. in 2016, so any change in consumption has an outsize impact on the global energy market. The country consumes about 14 million barrels a day -- equivalent to the combined needs of France, Germany, Italy, Spain, the U.K., Japan and South Korea.

Chinese and Western oil executives, speaking on condition of anonymity because they aren’t authorized to discuss the matter publicly, said the decline was measured against normal levels for this time of year. It’s a measure of the current loss in demand, rather than the average loss since the crisis started, which would be smaller.

Beijing has locked millions of people in quarantine and the New Year holiday has been extended. Flights have been canceled and authorities across the globe are trying to contain the virus’s spread. China’s central bank, seeking to avert a sell-off when markets open on Monday, is taking measures to boost liquidity.

The collapse in Chinese oil consumption is starting to reverberate across the global energy market, with sales of some crudes slowing to a crawl and benchmark prices in free-fall. Sales of Latin American oil cargoes to China came to a halt last week, while sales of West African crude, a traditional source for Chinese refineries, are also slower than usual, traders said.

Chinese refineries are storing unsold petroleum products such as gasoline and jet-fuel, according to the executives. But every day stockpiles are growing, and some refineries may soon reach their storage limits. If that were to happen, they would have to cut the amount of crude they process. One executive said that refinery runs were likely to be cut soon by 15-20%.

Traditionally during the New Year holiday, gasoline and jet-fuel demand increase as hundred of millions go back home, while gasoil consumption drops as industrial activity slows.

The price of Brent, the global oil benchmark, has fallen about 14% since Jan. 20, when financial markets first took notice of the magnitude of the health crisis in China. The April contract extended losses in early Asian trade on Monday, dropping 1.3% to $55.88 a barrel in London. A close at that level would be the lowest since January 2019.

Beyond the headline price for Brent, every other indicator in the physical and derivatives market also points to a weakening market. So-called time-spreads, which measure the price difference between contracts for delivery at different times, have collapsed -- an indication that short-term demand is expected to remain weak.

OPEC and its allies, which include Russia, are weighing their options to respond to the crisis and there have been discussions about calling an emergency meeting. Saudi Arabia is pressing for a gathering sooner than the one scheduled for March 5-6, though it has run into resistance from Russia. The Saudi and Russian oil ministers spoke on the phone for an hour on Thursday and another 30 minutes on Friday, according to Russians officials.

For now, OPEC has called a technical meeting this week to assess the situation, and the Joint Technical Committee will report back to ministers.

According to consultants at Energy Aspects Ltd., OPEC is considering an informal proposal to deepen current production curbs by about 500,000 barrels a day. But there’s no consensus on the idea, which was floated by at least one country. As OPEC and its partners are already in the midst of steep cuts, many analysts are skeptical on how much more they’re willing to do.

The most recent agreed reductions only came together after considerable diplomatic wrangling, and Saudi Arabia has already slashed production to the lowest since 2014. Russia, which has become the most important producer in the coalition alongside the kingdom, has typically taken some persuading to sign up to additional cuts. Still, if the alliance does agree to call early meeting, historic precedent suggests it will probably result in action.

To contact the reporters on this story: Alfred Cang in Singapore at acang@bloomberg.net;Javier Blas in London at jblas3@bloomberg.net

To contact the editors responsible for this story: Will Kennedy at wkennedy3@bloomberg.net, Emma Ross-Thomas