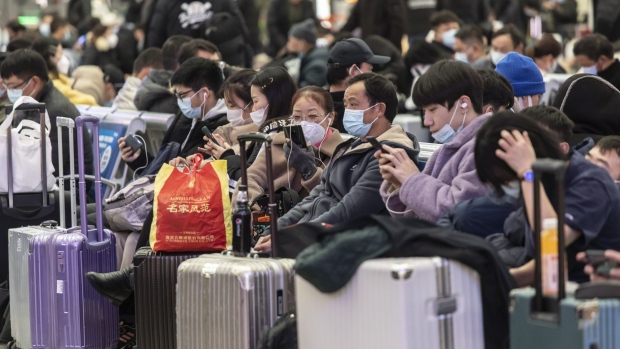 (Bloomberg) -- More Chinese are joining the great travel rush back to their home towns for the Lunar New Year holiday despite the spread of omicron, unleashing pent-up demand and providing a bump to oil consumption.

China expects the number of trips people make this year will be 36% higher than 2021, even as some local governments once again encouraged residents to stay put for the holiday to prevent the spread of the coronavirus. Hundreds of millions of Chinese typically travel over the festival period, jumping on planes, trains, buses and cars to see their extended families.

“This year, no matter how troubling it is, I have to be at home,” said Feifei Shen, a 35-year-old investor relations professional, who made the four-hour train journey to Liaoyang from the nation’s capital three weeks ahead of the start of Lunar New Year. “I spent the holiday alone in Beijing last year.”

The surge in journeys will aid oil demand just as crude prices soared to the highest level in seven years on stronger than expected consumption and shrinking stockpiles. That’s prompted a raft of banks including Goldman Sachs Group Inc. to predict a return to $100 oil this year.

Virus fears are still preventing a lot of people from traveling, however. While the government expects 1.18 billion passenger trips to be made during the holiday travel season -- which started Jan. 17 and ends Feb. 25 -- that’s 60% lower than the same period in 2019 prior to the pandemic.

Omicron has breached China’s virus defenses and spread throughout various regions, putting pressure on authorities to curb the more transmissible variant. Local governments in Beijing and Shanghai are encouraging residents not to travel, while provinces including Guangdong and Zhejiang are offering gifts such as movie tickets and shopping coupons to people who stay put.

Despite the pleas and incentives, many are opting not to miss another holiday with family. At the start of the second festival week, daily road trips were at 19.2 million, 41% higher than the same period last year, while the volume of passengers on planes was up 51%, according to government data.

That’s set to provide a modest boost to oil consumption in a subdued period for demand as businesses close for the holiday and Beijing curbs industrial output to ensure blue skies for the Winter Olympics. Energy Aspects Ltd. expects oil demand in the first quarter will be 51,000 barrels a day higher year-on-year.

Jet fuel demand is forecast to peak at about 729,000 barrels a day as of Feb. 22, the highest since August, according to data from BloombergNEF. The average price for airline tickets over the Lunar New Year holiday period was 40% higher than 2021, according to travel platform Trip.com Group Ltd.