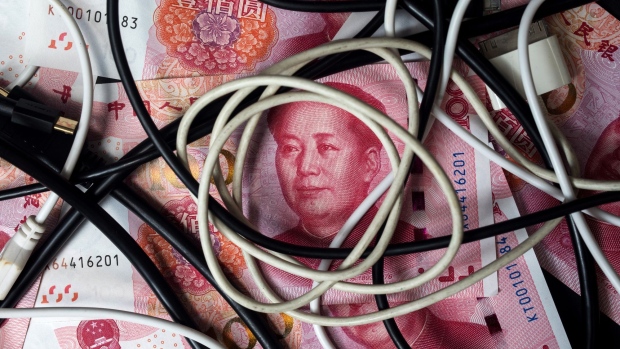 (Bloomberg) -- China has outlined plans for further tests of its digital currency initiative, now aiming for trials in areas including Beijing and Hong Kong.

A digital renminbi trial will start in some of the country’s most developed regions, the Commerce Ministry said in an announcement on Friday that didn’t provide a timeline. Tests will take place in the area of northern China encompassing Beijing, coastal city Tianjin and Hebei Province; the city cluster in the Yangtze River Delta region including Shanghai; and the Greater Bay Area in the Pearl River Delta Region including Shenzhen, Hong Kong and Macau.

Cities in central and western China may also undertake the trials if they meet certain conditions, the ministry said, without specifying what they were.

The exercise will kick off in Shenzhen, Chengdu, Suzhou, Xiong’an and sites for the 2022 Winter Olympics and will then expand to other regions, the announcement said.

The digital currency trials are part of a broader package of initiatives Beijing rolled out on Friday to stimulate innovation and encourage further opening of its service sector. The same day, the country reported steady industrial growth in July, though retail sales continued to show weakness.

China has been ramping up plans and testing for the People’s Bank of China digital currency in recent months, an initiative that some see as a threat to cryptocurrencies like Bitcoin and even potentially someday to the U.S. dollar’s dominance.

In April, Bloomberg News reported that state-owned Chinese banks were conducting internal, hypothetical-use tests of the currency. Last month, Softbank Group Corp.-backed ride-hailing company Didi Chuxing said it was working with the PBOC on tests of the currency and Bloomberg reported that Tencent Holdings Ltd.-backed food delivery giant Meituan Dianping was planning tests on its platforms as well.