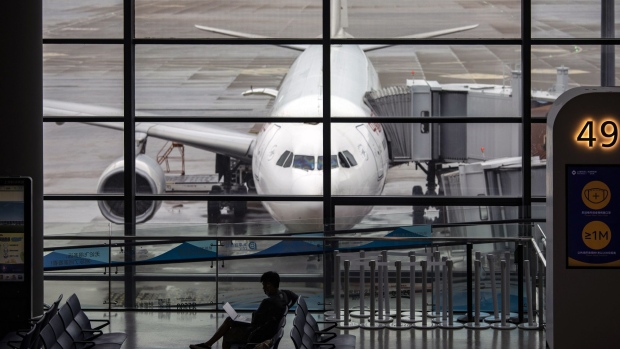 An China Eastern Airlines Corp. aircraft at the Hongqiao International Airport in Shanghai, China, on Monday, Sept. 5, 2022. China remains almost completely isolated from the rest of the world as it adheres to its strict Covid Zero policy, with flights in and out of Asia’s biggest economy even fewer than when the first cases of the virus were discovered in Wuhan in early 2020. Photographer: Qilai Shen/Bloomberg , Bloomberg

(Bloomberg) -- China plans to increase the number of international flights operated by domestic and foreign airlines to 840 a week from Oct. 30 to March 25. That’s a jump of 106% from October 2021 to late March this year, but still way below pre-pandemic levels.

The announcement, made at a Civil Aviation Administration of China briefing Wednesday, follows the country’s major airlines saying earlier this month they planned to put on more international flights. While China is sticking with Covid lockdowns and mass testing, the moves signal a marginal easing of border curbs that have wiped out international travel and bruised the world’s second-biggest economy.

The third quarter already saw an increase in international travel, with trips rising 73% from April-June to 537,000, CAAC official Xu Qing said. According to data provider VariFlight, flights in and out of China still languish at about 95% of pre-Covid levels.

A total of 92,970 domestic commercial passenger flights are planned in the coming five months, up 2.4% from same period a year earlier, the CAAC said.

--With assistance from Danny Lee.