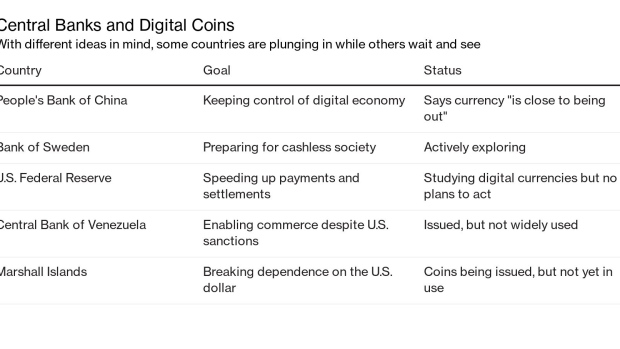 A delivery driver for Ele.me, Alibaba Group Holding Ltd.'s food-delivery platform, wearing a protective mask looks at a smartphone while sitting on a motorcycle in Shanghai, China, on Friday, March 6, 2020. While infections in the rest of the world accelerate, the coronavirus epidemic is showing signs of easing at its center -- China -- with new cases slowing dramatically and recoveries gathering pace. Still, doubt remains over whether the government's statistics show the full picture. Photographer: Qilai Shen/Bloomberg , Bloomberg News

(Bloomberg) -- China’s central bank is planning to test its digital currency on platforms operated by Meituan Dianping, enlisting the food delivery giant backed by Tencent Holdings Ltd. in a major step toward the token’s mass adoption.

Meituan has been in talks with a research wing of the People’s Bank of China on real-world uses for the virtual legal tender dubbed Digital Currency Electronic Payment or DCEP, according to people with direct knowledge of the matter. The specifics of the partnership have yet to be finalized, they added, asking not to be identified revealing private discussions.

Meituan joins ride-hailing startup Didi Chuxing in exploring applications for a digital yuan, which lives on a mobile wallet application and offers Beijing greater control of the country’s financial system. Like Didi, Meituan hosts billions of dollars in daily transactions in realms from meal delivery to online travel services, and its participation would drive mass acceptance and widen Beijing’s global lead in government-backed virtual currencies. The central bank research wing is also in discussions on trials with Bilibili Inc., another Tencent-backed company that streams video, one of the people said.

The duo -- which offer a slew of online services from food delivery to e-commerce and video games -- currently employ payment systems from Tencent and Alibaba Group Holding Ltd.-affiliate Ant Group and would appear to be good candidates to help DCEP carve out a share of the country’s $27 trillion payments industry. A virtual yuan could bolster the government’s grip over the world’s No. 2 economy and its giant financial services industry, and some observers think it could someday shift the global balance of a U.S.-dollar-centric global currency system.

Virtual cash would be quicker and easier to use than the paper kind -- and would also offer China’s authorities a degree of control never possible with physical money. The rise of independent cryptocurrencies such as Bitcoin and Ether, meanwhile, have created the danger that a huge swath of economic activity will occur out of the view of policymakers.

While a digital currency is likely years away from a national rollout, China’s moves have triggered concern about a new threat to U.S. financial dominance. China’s central bank has led global peers in the development of digital legal tender, with research efforts started in at least 2014.

It began a pilot program for its digital currency only a few months ago. The initial testing was limited to four cities, with local media reporting that some of the money was distributed via transport subsidies to residents in Suzhou.

Read more: China’s Digital Currency Could Challenge Bitcoin and Even the Dollar