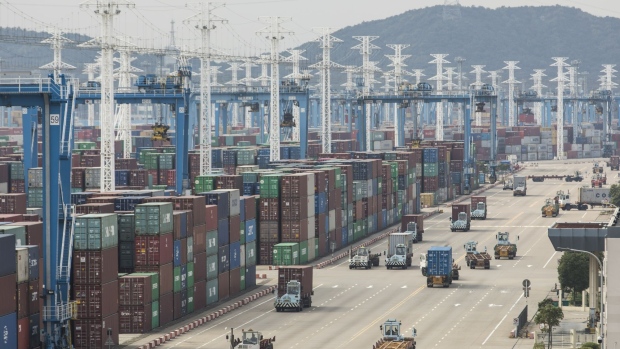 Containers sit stacked next to gantry cranes as trucks operate at the Port of Ningbo-Zhoushan in Ningbo, China, on Wednesday, Oct. 31, 2018. President Donald Trump wants to reach an agreement on trade with Chinese President Xi Jinping at the Group of 20 nations summit in Argentina later this month and has asked key U.S. officials to begin drafting potential terms, according to four people familiar with the matter. , Bloomberg

The partial closure of the world’s third-busiest container port is worsening congestion at other major Chinese ports, as ships divert away from Ningbo amid uncertainty over how long virus control measures in the city will last.

In nearby Shanghai and in Hong Kong, congestion is once again increasing after dropping due to the reopening of Yantian port in Shenzhen, which shut in May for a seperate outbreak. The number of container ships anchored off Xiamen on China’s southeast coast rose to 24 from 6 at the start of the month, according to shipping data compiled by Bloomberg. 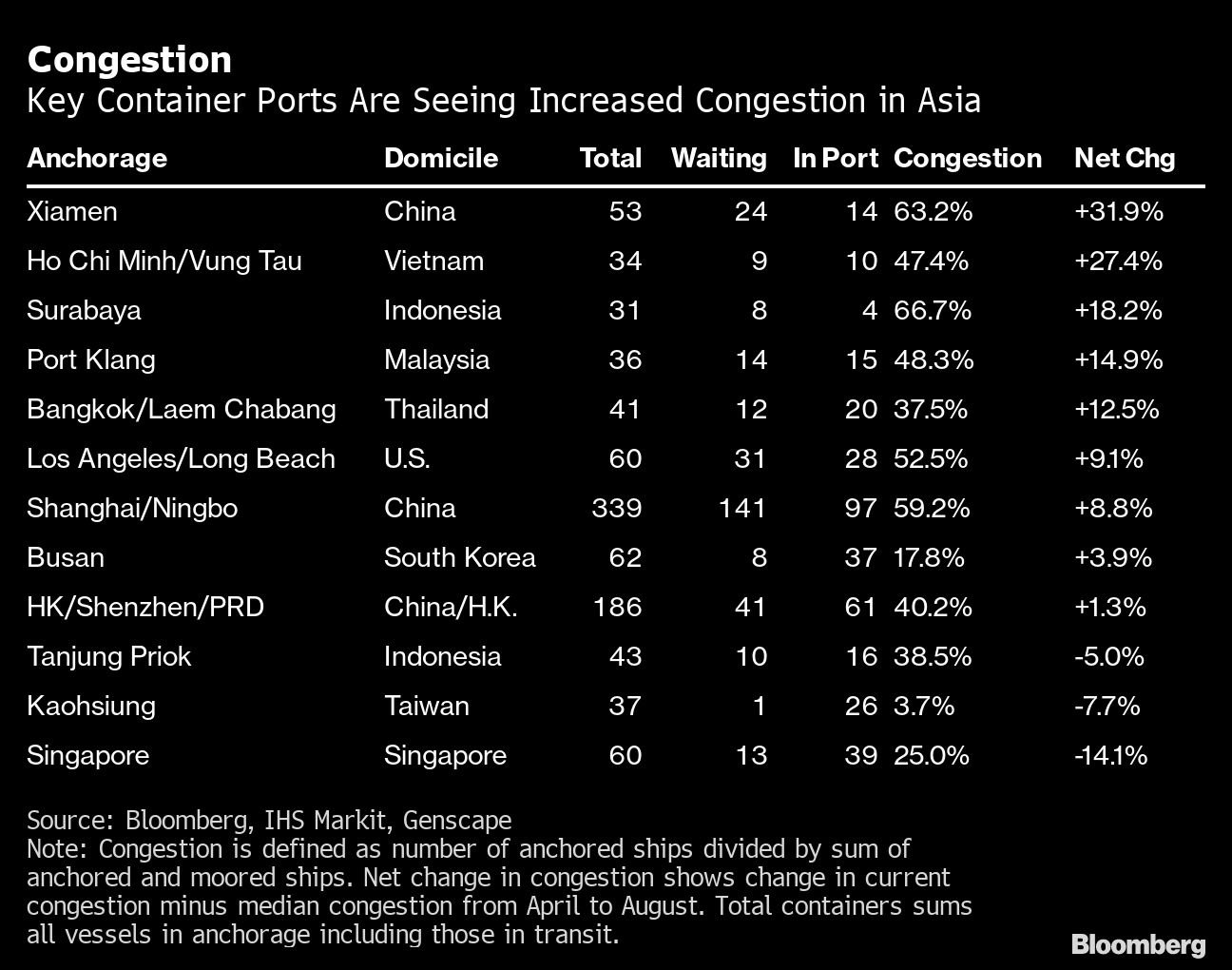 The Meishan terminal at Ningbo port was shut last week after a dock worker became infected with the delta variant of COVID-19. The terminal accounts for about a quarter of the port’s capacity, and it was still closed Tuesday, according to a worker in the press office, who declined to give their name or any other information.

The world’s biggest shipping lines including AP Moller-Maersk A/S and CMA CGM SA are skipping Ningbo port after the closure, according to Simon Heaney, senior manager of container research at Drewry Shipping Consultants Ltd. The companies prefer to divert shipments to other ports rather than wait outside Ningbo for an unknown length of time while the COVID-19 outbreak continues, he said.

Some other ships are willing to wait, with 141 ships at a shared anchorage for the Shanghai and Ningbo ports Tuesday, 60 more than the median number from April to August. 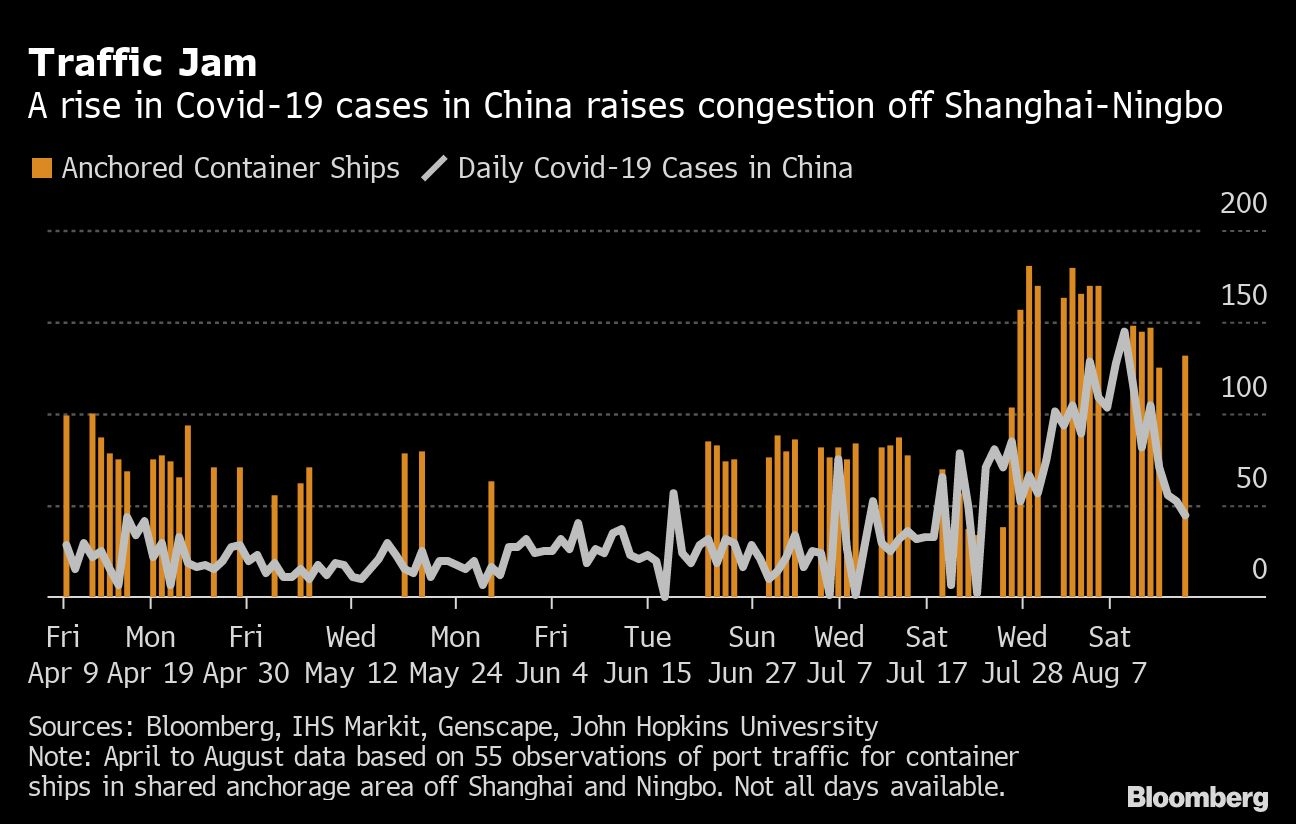 “We hear the backlog is getting bigger and the congestion is getting worse,” said Dawn Tiura, CEO of logistics industry association Sourcing Industry Group. “The disruption across ports is absolutely related. If you are buying goods that originate or move through China, you need to increase lead times or find another source of supply.”

The shipping industry has been plagued by disruptions this year that have created delays in global shipping chains and driven freight rates to record highs. Snarls have ranged from a mega-ship stuck in the Suez Canal in March to virus outbreaks in Southeast Asia and China reducing productivity at ports. 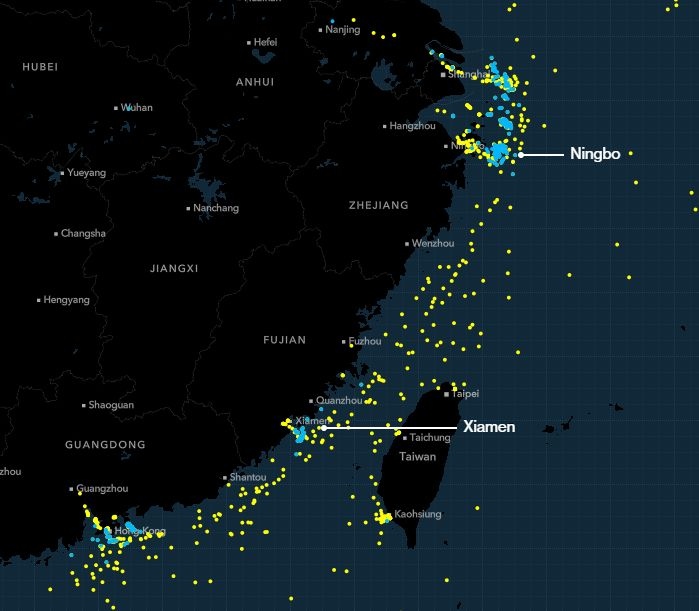 The backlog has stretched across the Pacific Ocean to Long Beach port in Los Angeles, where more than 30 ships were waiting to get into port to offload, Bloomberg’s data shows. Elsewhere in Southeast Asia, anchored ships off Vietnam’s two largest ports rose to six above the median.

“Most ports are already experiencing congestion or delays, so any additional and uncatered for volumes will heap on more pressure,” said Drewry’s Heaney.