China’s industrial output increased in April for the first time since the coronavirus outbreak, adding to early signs of a recovery that economists cautioned would be slow and challenging.

Industrial output rose 3.9 per cent from a year earlier, reversing a drop of 1.1 per cent in March, data showed Friday. Fixed-asset investment decreased 10.3 per cent in the first four months, a smaller decline than the 16.1 per cent drop in the January-March period. Retail sales slid 7.5 per cent, more than the projected six per cent drop. The surveyed urban jobless rate, which doesn’t include all of the workforce, rose to 6.0 per cent, from March’s 5.9 per cent.

The industrial improvement signaled that government stimulus efforts are having some effect, although support remains modest compared with China’s global peers. With continued efforts to restore production and the gradual lift of virus-containment measures, the back-to-work rate rose to around 95 per cent by mid-April, up from 85 per cent at end-March, according to a Bloomberg Economics estimate.

Private firms’ industrial output rose seven per cent in April, faster than other types of enterprises including SOEs and foreign companies, according to the statement.

“The data is in line with the overall trend that supply is stronger than demand and the recovery is mainly driven by supply,” said Larry Hu, Chief China Economist at Macquarie Group Ltd.

Government-led investment, especially infrastructure projects and the so-called technology-focused “new infrastructure” initiative, received an increased boost as Beijing ramped up both policy and financial support. Private sector investment, however, continued to contract faster than that by the state, shrinking 13.3 per cent in the first four months. 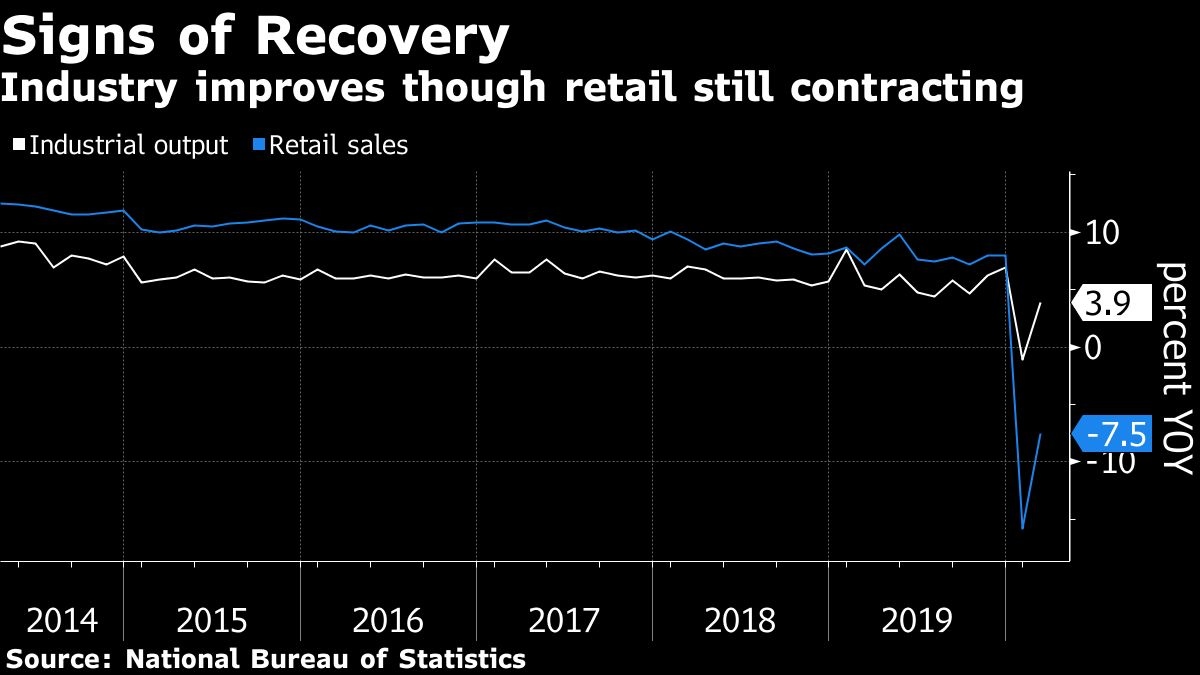 “The economic outlook will probably improve slightly in the coming months as other countries exit lockdowns. Even so, China needs to sustain -- and step up -- policy support, given weakness in private-sector demand, the global downturn and some resurgence of trade tensions with the U.S.”

In spite of the improvement, the Chinese economy “hasn’t returned to normal level,” Liu Aihua, a NBS spokeswoman said at the press conference. There are “pent-up demand effects” in the data improvement, she said.

Retail sales remained soft in April, suggesting weak domestic demand. The retail data underscore the caution with which the public is greeting measures to reopen the economy.

In the month, restaurant and catering receipts slumped by 31.1 per cent from a year earlier, after a 46.8 per cent collapse in March. Communication appliances rose 12.2 per cent.

Slumping external demand, as most of the major economies are still trapped in lockdowns to various extents, could continue to be a drag on growth. Plunging oil prices, also showed there are downside risks on the demand side, Liu warned, with negative impacts seen in petroleum related sectors.

“The divergence between supply and demand raises growth risks in the coming months,” said Frederic Neumann, co-head of Asian economic research at Hongkong & Shanghai Banking Corp Ltd. “The consequent inventory build-up may ultimately throttle back manufacturing activity, leading to more of a W-shaped recovery than a swift V.”

Hong Kong’s Hang Seng index fell 0.2 per cent while the Shanghai Composite was flat, as investors digested the mixed data.

The slight increase in the jobless rate, which economists say severely understates the current situation, showed that unemployment pressure is still piling up. Economists expect the official rate to edge higher this year, with migrant workers and fresh graduates being the two most vulnerable groups.

“Going forward, the ensuing global recession will weigh on China’s recovery. But China’s growth now relies largely on domestic demand,” said Louis Kuijs, head of Asia economics at Oxford Economics Hong Kong Ltd. “We expect China’s stimulus to remain relatively modest in size. But it should add support to the domestic demand recovery that we see continuing in the rest of the year.”

--With assistance from Miao Han.