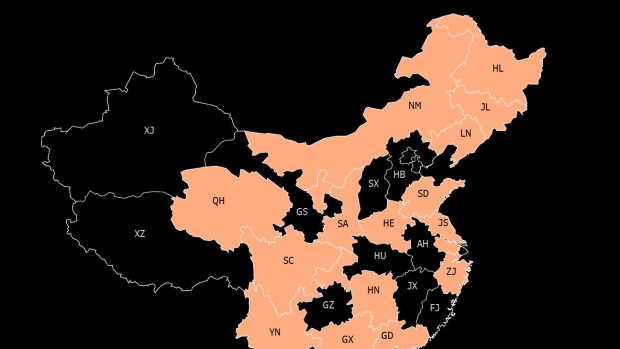 (Bloomberg) -- China’s power crisis looks set to spur it to import more coal from a wider range of producers, putting it into competition with European and Indian buyers that are also snapping up more of the dirtiest fossil fuel.

More than two-thirds of China’s electricity comes from coal-fired plants and, while more than 90% of the fuel it uses is mined locally, it’s difficult to raise local output at short notice. Looking offshore is the easier option, but that’s been complicated somewhat by Beijing’s decision to ban imports from Australia -- the world’s second-biggest exporter -- late last year.

It isn’t easy to ramp up local coal supply, given the low investment in new mines in recent years, Bloomberg Intelligence analyst Michelle Leung said in a note. Over-mining is also strongly prohibited amid safety concerns, she said.

Instead, China is likely to try and increase purchases from traditional sources. Jilin province will seek more coal from Indonesia, Russia and Mongolia to ensure power supply and heating, Governor Han Jun said in a statement.

Asia’s largest economy could also look farther afield to coal exporters like South Africa, Colombia, the U.S. and Canada, putting it into competition with buyers in other parts of the world and adding more impetus to global price rallies. European electricity producers are snapping up coal as a shortage of natural gas forces utilities to burn it to cope with their own power crunch, while India is also running low on inventories of the fuel.

“Given the coal shortage in the country, we can expect China to ramp up its buying activity and most of it is likely to come from Southeast Asian markets due to proximity,” said Abhinav Gupta, a dry cargo research analyst at Braemar ACM Shipbroking. “Most of these coal producers are at peak capacity, which may tighten the coal market and push up prices.”

Beijing could of course decide to ease the ban on Australian coal imports, although that may not be politically palatable. BI’s Leung doesn’t think it’s likely, although Ralph Leszczynski, head of research at shipbroker Banchero Costa & Co., reckons it’s a possibility. “Soon the Chinese government might be forced into easing the ban on Australian coal, as that would allow more coal to be imported and ease some pressure on domestic coal prices,” he said.

At least 17 Chinese provinces and regions making up 66% of the country’s gross domestic product have announced some form of power cuts, mostly targeted at heavy industrial users, according to Bloomberg Intelligence. The reasons are two-fold -- record high coal prices are causing power generators to trim output despite soaring demand, while some areas have pro-actively halted electricity flows to meet emissions and energy intensity goals.

China’s energy crisis is shaping up as the latest shock to global supply chains as factories are forced to conserve energy by curbing production. The disruption comes as producers and shippers race to meet demand for everything from clothing to toys for the year-end shopping season, grappling with supply lines that have been upended by soaring raw material costs, long delays at ports and shortages of shipping containers.

China is taking steps to ease an electricity shortage though more policies are needed, state media reported Tuesday, as the world’s second-largest economy braces for shocks from a worsening supply crunch. The tight supply situation is likely to ease gradually due to measures by authorities to ensure power production and avoid cuts, the official Economic Information Daily said in a front-page report, citing unnamed industry experts.