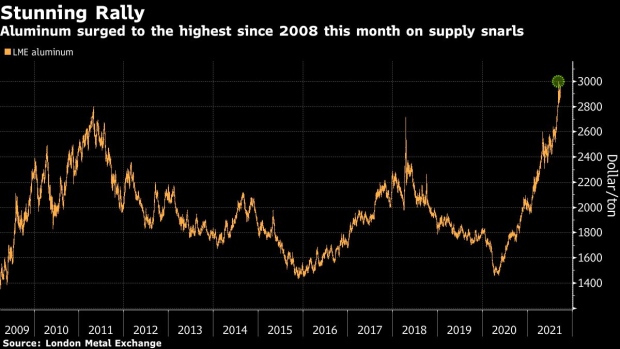 (Bloomberg) -- China’s power-hungry commodities producers are in Beijing’s firing line, but the government’s efforts to stave off a full-blown energy crisis are also fueling rallies in everything from fertilizer to silicon.

Production of metals from aluminum to steel has been spluttering for months as power curbs have intensified across key industrial provinces. Now factories producing high-end goods are starting to feel the pinch too, creating burgeoning risks to the nation’s economic growth. What’s worse, the energy crunch is spreading to a sector that alarms Beijing the most: food.

From soybeans to nickel, here’s how China’s efforts to avert an energy crunch are upending industrial commodities markets.

Ensuring that China’s 1.4 billion people have enough to eat is a top national priority, and yet the power shortage is forcing soybean processors to shut and sending fertilizer prices soaring.

Soy plants operated by Louis Dreyfus Co., Bunge Ltd. and Wilmar International Ltd.’s Yihai Kerry unit are among those shuttered. So far, the impact has been cushioned by weak demand for soybean meal -- used in animal feed -- due to a slump in pork prices. However if plants remain halted, it could delay soybean purchases by the largest buyer and crimp U.S. exports.

Given the importance of fertilizers to overall food security, the rally in prices has attracted increasing scrutiny from Beijing. This week a Chinese state-owned firm announced it had been fined for raising prices of fertilizer products, following warnings earlier this year against hoarding and price gouging.

The power crunch in the top base-metals consuming country has triggered production losses at smelters and fabricators in the past few months, hitting both supply and demand for everything from copper to tin. So far, the biggest impact has been felt at energy-intensive aluminum plants.

That has choked off aluminum supply -- just under 3 million tons of annual smelting capacity, according to Goldman Sachs Group Inc. -- fueling the metal’s rally to the highest level since 2008 earlier this month. While that’s already about 8% of China’s total capacity, the prospect of further power rationing as the country braces for higher winter demand will keep the sector under pressure.

Steel mills, the main targets of China’s campaign to cut emissions, have also been hit by electricity curbs. That’s led to a wild ride for iron ore -- the main steelmaking raw material -- in recent months, with prices falling by half from a peak in May. More than 80 domestic steel mills have suspended production for maintenance in September, according to researcher Mysteel.

Nickel rose to the highest level since 2014 earlier this month but concerns over China’s power crunch have clouded the outlook for stainless steel consumption. In Fujian province, China’s key stainless steelmaking hub, some mills have started to suspend production, with national monthly output set to fall by more than half a million tons, according to Mysteel.

The impact on some minor commodities markets has been even more stark, with silicon prices surging to record highs this month after China imposed curbs on supply. The quadrupling in silicon prices this year threatens to heap further misery on aluminum producers, who rely on it as an alloying ingredient in specialized value-added products.