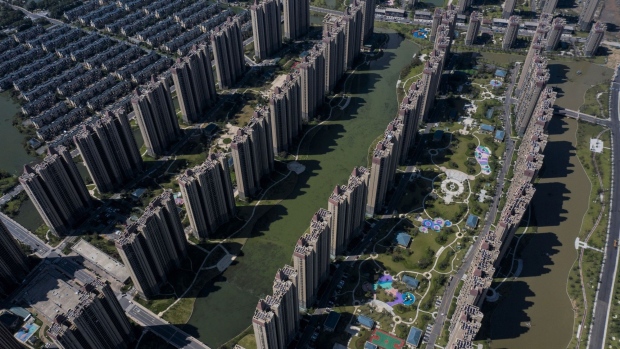 (Bloomberg) -- China Evergrande Group unit’s statement of a negotiated coupon payment is easing fears about risk contagion of the developer’s debt crisis, and analysts say this is presenting opportunities for Chinese property assets.

An onshore arm of the distressed developer said Wednesday it negotiated a yuan bond interest payment, reducing concerns over a potential disorderly debt resolution at Evergrande that sparked a global selloff of risk assets earlier this week. A gauge of Hong Kong-listed real estate stocks rose as much as 5.2%, the most since Feb. 25, while the sector’s dollar bonds also rallied.

Country Garden Services Holdings Co. and Longfor Group Holdings Ltd. each jumped more than 11% to be the top gainers on the Hang Seng Properties Index. Evergrande’s shares surged as much as 32% before paring the advance to 18% as of 1:29 p.m. local time.

Here is a selection of analyst comments on Thursday’s price action:

The Wednesday filing by Evergrand’s onshore property unit on the negotiated yuan bond coupon payment “displayed that maintaining bond solvency was still on the agenda for Evergrande and also raised hopes for investors that creditors are to an extent open to resolution.”

“The read-through is that an orderly restructuring/negotiation is still on the cards for other onshore and offshore creditors and could buy the time Evergrande so desperately needs.”

While the yuan bond interest payment is positive, a report about potential plans for Evergrande’s restructuring might have played a bigger role in driving the property sector’s rally.

As for how long the rebound can sustain, “I think it depends on Evergrande’s newsflow like whether it will default on the interest payment on offshore bonds.”

“The Hong Kong stock market is picking up cues from the bond market as well as mainland stocks, which performed better than expected on Wednesday. The A-share market is a leading indicator at this point. It’s showing that the property sector is obviously not crashing, which is boosting sentiment broadly today. There’s also a bit of a technical rebound.”

“Our base-line view is that Evergrande will unlikely achieve sustainable deleveraging and asset disposals in the near term will only provide short-term liquidity (and temporary boost to the market sentiment); however, ultimately leading to an orderly restructuring. Beyond regular interest payments, next key trigger point to watch is principal repayments of about $3.5 billion due in March/April 2022.”

“The underlying reason for the rebound would be news of possible restructuring on top of onshore bond interest payment, which has greatly alleviated concerns over the property sector risk contagion.”

“The markets are now pricing in Evergrande’s debt crisis is likely to be ring-fenced within the property sector and not spill over to the wider financial system.”

“There are three points here, China is closer to rescue of Evergrande, market has been oversold, and finally short covering before China goes for long October holidays.”

Evergrande will “probably” make its bond repayments, but there is still “tremendous pressure” on the firm, and there are still “a lot of risks on the horizon” for China’s real estate sector.