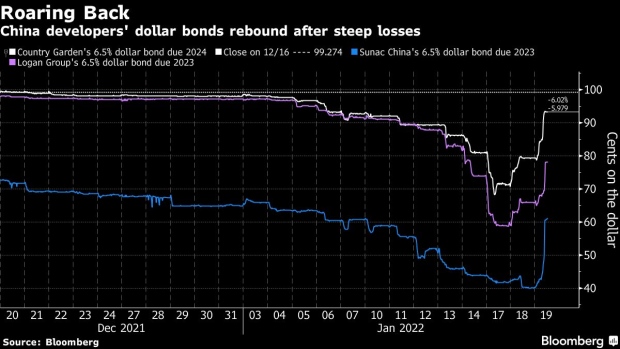 (Bloomberg) -- A record-breaking rally in Chinese property bonds is highlighting the huge sums of money primed to flow into the distressed securities should Beijing dial back its industry crackdown.

High yield dollar notes jumped as much as 10 cents on the dollar and Chinese property stocks surged on Wednesday after reports that regulators may ease curbs on developers’ access to funds from presold homes. Bonds of Country Garden Holdings Co. and Sunac China Holdings Ltd. saw record gains, only days after tumbling to unprecedented lows. In the stock market, short-seller favorite Agile Group Holdings Ltd. rose 13%, the most since 2015.

With a crisis of confidence and financial contagion spreading across the property market this week, the news would be welcome reprieve for a credit market that’s now saddled with billions of dollars in losses. Even if it’s unclear whether Wednesday marks a turning point for the beaten-down sector, traders are having a hard time turning down bets that things will improve.

“This is exactly what we were hoping for,” said Jean-Louis Nakamura, chief investment officer of Lombard Odier Asia Pacific. “Bringing back some calm, discrimination and sustainable stability -- or improvement of spreads at least of high quality developers -- would already be significant progress.”

Volatility is becoming a market norm. Agile shares are the wildest in at least a decade, according to 10-day historical data. Sunac stockholders are grappling with swings that are five times more brutal than those of Bitcoin. Country Garden’s 2024 dollar bond -- which rarely budged more than 1 cent daily for the better part of last year -- is this week moving 8 to 13 cents.

A top-performing Chinese money manager said earlier in January he was buying dollar bonds of the country’s developers, betting authorities would soon unleash measures to support the industry.

A relaxation of presales restrictions “could be the biggest and arguably most important easing measure towards the property sector so far,” said CreditSights analyst Zerlina Zeng.

A number of major cities in China and some smaller municipalities tightened supervision over the use of presold property proceeds at the end of last year, local media reported at the time. Such cash generally accounts for almost half of developers’ inflows, according to official data.

Market-oriented funding channels have been all but paralyzed. Selling credit offshore is prohibitively expensive and the equity market can only digest so much -- when Sunac tapped stock investors instead last week, its shares sank a record 23% in Hong Kong.

While access to funding is key, it’s not the only challenge facing property developers, who have a wall of upcoming maturities to contend with. Offshore bondholders are unlikely to be the priority when Beijing’s focus is ensuring homes are delivered and wages are paid to migrant workers before the Lunar New Year holiday.

“This is really only a timing issue in accessing cash,” said Charles Macgregor, head of Asia at Lucror Analytics. “The challenges will persist until there is clear evidence that most issuers have access to numerous sources of funding, including the offshore dollar bond market.”

Even as China cut interest rates this week and pledged to use more monetary tools to support the economy, official rhetoric on housing remains the same. In a scheduled press briefing Tuesday, officials at the People’s Bank of China said mortgage loans would be kept “basically stable.” Policymakers also reiterated the oft-repeated catchphrase that houses are for living in, not for speculation.

“We should not be too upbeat as to whether we are going to outright see a major reversal,” said Winnie Chiu, senior equity advisor at Indosuez Wealth Management.

With bonds of higher-rated issuers like Country Garden trading close to distressed levels only two days ago, even just a signal from Beijing could be enough to lure the type of investors who place bets on the hardest-hit securities.

“This is a strikingly positive development,” said Wei Liang Chang, strategist at DBS Bank Ltd., referring to Wednesday’s reports on presales. “There is scope for a reflexive bounce in property credit -- particularly for investment-grade names. It could herald a greater degree of policy support for developers’ financing.”