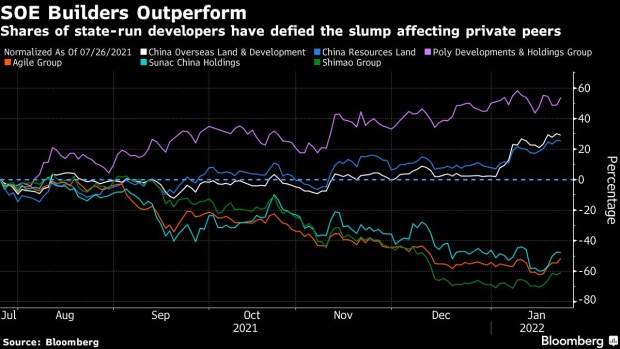 Chinese regulators see asset sales as a key step to easing the liquidity crisis that’s afflicting the real estate industry and impeding an economic recovery. Authorities in December eased limits on borrowing by major property firms used to fund M&A, part of efforts to engineer a soft landing for the sector after years of debt-fueled expansion.

The latest deals spurred optimism among bond and stock investors. A Bloomberg Intelligence index of Chinese developer stocks rose for a fifth day on Monday, taking gains over that period to as much as 12%, on course for the most in 18 months. Chinese high-yield dollar bonds, which are dominated by builders, rose as much as 2 cents on the dollar, according to credit traders.

Agile Group announced the sale of its stake in a joint venture for 1.84 billion yuan ($291 million) on Monday. The purchaser is Guangdong Zhonghai Property, an indirect wholly owned unit of state-run China Overseas Land & Investment Ltd., one of the country’s largest developers.

Asset purchases may help state builders gain more market share from their ailing private competitors. In 2021, 40% of the top 10 developers’ gross contracted sales were generated by central SOEs, up from 20% market share in 2010, according to Bloomberg Intelligence.

Meanwhile, Shanghai Pudong Development Bank priced a three-year, 30 billion yuan bond at 2.69% on Friday, with 5 billion yuan of the proceeds to be used for funding M&A in China’s property industry, the lender said. The bond was the first to be issued by a financial institution for M&A deals in the real estate development sector, the bank said Saturday in a WeChat statement.

State-owned China Merchants Shekou Industrial Zone Holdings Co. is selling as much as 1.29 billion yuan of M&A bonds on China’s interbank bond market on Monday and Tuesday. C&D Real Estate Corp. aims to raise up to 1 billion yuan from such notes this week.

(Updates with report of another Shimao asset sale in eighth paragraph)