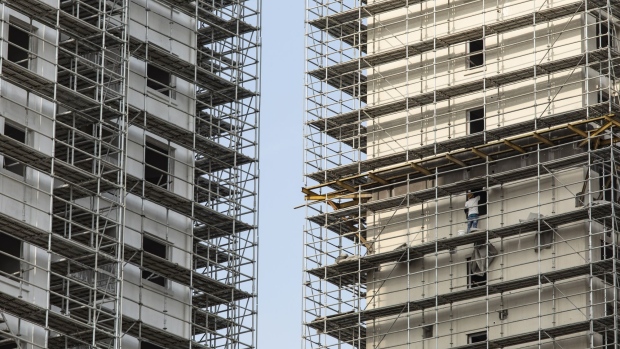 A construction worker labors on the scaffolding of a building at an under construction residential housing development in Shanghai, China, on Thursday, July 29, 2021. Chinese policy-making bodies collectively issued a three-year timeline for bringing “order” to the property sector, long under scrutiny due to an excessive buildup of leverage among home-buyers and developers. Photographer: Qilai Shen/Bloomberg , Bloomberg

(Bloomberg) -- Beijing’s unprecedented determination to curb the property sector could be China’s “Volcker Moment” as it will cause a “significant” slowdown in economic growth, according to Nomura Holdings Inc.

Unlike in previous economic down cycles, Chinese authorities look set to tighten property sector policy and tame prices this time, in order to reduce wealth inequality and boost the falling birthrate, economists led by Lu Ting wrote in a report Tuesday. Policy makers will be willing to sacrifice near-term economic growth to tame house prices and divert financial resources out of the property sector, which accounts for a quarter of China’s gross domestic product, they wrote.

A “Volcker Moment” refers to a policy change like the decision by the Federal Reserve under former Chairman Paul Volcker to quickly raise interest rates to 20% to contain the inflation of the late 1970s. That sudden change caused a jump in unemployment but also led to inflation slowing.

“Markets over the near term need to be prepared for a likely marked growth slowdown, more developer defaults and home foreclosures, and perhaps some turmoil in stock markets,” the economists wrote.

Authorities appear to be determined to expand the property tax scheme from trials in Shanghai and Chongqing cities to the entire nation, according to the report. This will address wealth inequality and help replace local governments’ income from land sales, which will be reduced by the ongoing curbs, the report said.