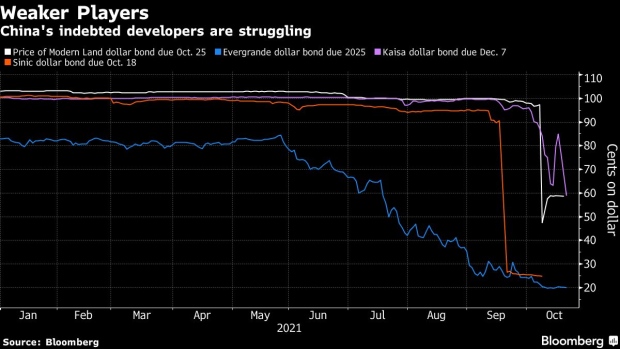 (Bloomberg) -- China’s property sector is undergoing its biggest credit-market shakeout in years as policy makers try to clamp down on over-indebted developers without infecting their healthier rivals.

Companies with the worst balance sheets are getting crushed by a spike in borrowing costs, a phenomenon that’s intensifying this month as bills come due. At least three Chinese developers have defaulted in October, one may struggle to pay interest due Friday and another failed to get a three-month extension for a note maturing Monday. Then there’s China Evergrande Group, the whale in the dollar debt market which may default as soon as Saturday.

China’s real estate sector makes up almost half of the world’s distressed dollar-denominated debt, with speculative-grade yields topping 20% earlier this month -- the highest in a decade. As authorities in Beijing seek to defuse moral hazard and deleverage the economy, some companies are being allowed to fail as long as there’s no messy spillover into the broader financial system.

That strategy appears to be working. Even as Evergrande sank 14% on Thursday, shares of other Chinese developers rallied after Vice Premier Liu He became the highest-ranking official to assure that risks in the property market are controllable. Morgan Stanley’s credit and equity strategists have recently turned bullish on the sector, predicting supportive policies in areas like mortgages will limit the fallout.

“While some weaker developers will still default, we now see some green shoots of policy relaxations which should prevent contagion risk,” said Abhishek Rawat, portfolio manager at Hong Kong Asset Management Ltd., who is turning more positive on the sector. “It could be time now for new capital to scale in to buy some of the stronger companies.”

Evergrande, the most indebted of China’s struggling developers, may find it harder to avoid default after scrapping talks to offload a stake in its property-management arm. A 30-day grace period expires this weekend for an $83.5 million interest payment on a bond that Evergrande missed last month. Fantasia Holdings Group Co., Sinic Holdings Group Co. and China Properties Group Ltd. have all defaulted on dollar bonds in October.

Modern Land Co. suspended trading in its shares Thursday after canceling its request to extend the maturity of a $250 million bond by three months. The note, which matures Oct. 25, was indicated at about 55 cents last Friday, down from about par at the start of the month. Modern Land’s shares have slumped 34% in October.

Another domino could fall Friday, when Kaisa Group Holdings Ltd. is due to pay $35.9 million of interest on a dollar note. Investors are pricing in a high likelihood of default, with the note trading at less than 40% of face value after the company canceled meetings with some investors that had been scheduled to take place this week. Moody’s Investors Service has downgraded the firm to B2 from B1.

Regulators in Beijing are trying to reassure markets that the world’s second-largest economy can weather the crisis at Evergrande and its smaller rivals. People’s Bank of China Governor Yi Gang, who directly referenced Evergrande last Sunday, echoed his colleagues when he said China could contain the fallout. Shares of higher-rated developers like Longfor Group Holdings Ltd. and Country Garden Holdings Co. were among the biggest gainers in Hong Kong on Thursday.

But for troubled companies, the biggest refinancing test isn’t even this month. Fifteen of China’s most stressed property firms will have $5.2 billion due in January, according to Citigroup Inc. calculations as of Oct. 1. That’s more than double the amount due in October.

“To say that China HY (high yield) -- especially the China HY property sector -- is having a tough year would be an understatement,” wrote Kelvin Pang, Morgan Stanley’s credit strategist, in a Oct. 18 note. “2021 is shaping up to be a huge test for the asset class.”