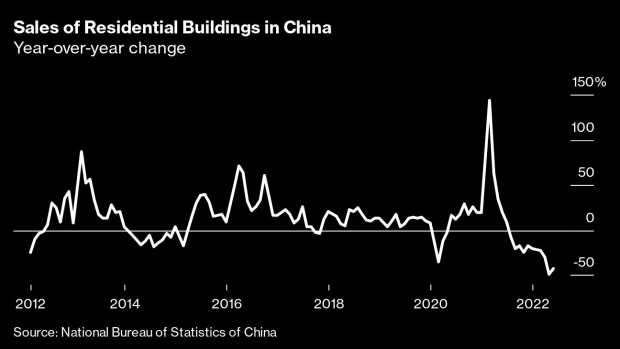 A worker stands next to a crane at a construction site for a residential development on the outskirts of Shanghai, China, on Sunday, March 14, 2021. China’s home prices grew at the fastest pace in six months in February, as a lower supply of projects during a holiday season added to a fear of missing out among buyers. Photographer: Qilai Shen/Bloomberg , Bloomberg

(Bloomberg) -- Charlene Chu, famed among China watchers for warning about a debt bubble when at Fitch Ratings, says that pain is only just beginning for credit extended to Chinese property.

In the wake of Beijing’s sweeping crackdown on leverage built up in real estate, China Evergrande Group and others have defaulted on a slew of bonds. Chu, a senior analyst at Autonomous Research, a division of Sanford C. Bernstein & Co., estimated that “we have 30 companies who’ve defaulted with total liabilities of around $1 trillion.”

While banks have the safeguard of collateral for their loans to developers, “where things could start to get a lot more ugly” is if lenders start revaluing that collateral lower, Chu said in a June 15 interview with the One Decision podcast.

“We’re just so early in this process of these defaults happening, and restructurings usually take quite a long time,” said Chu, who was known at Fitch for warning in the early 2010s over debt risks in the shadow banking sector. “We haven’t really gotten to the point of saying, ‘OK, well, what really is going to happen with that building?’”

A bigger risk looms if Chinese individuals start defaulting on property loans -- a prospect made more likely by the increase in Chinese unemployment, according to Chu.

“We’ve got a property sector that is almost dead and barely growing and used to employ huge numbers of people and a lot of downstream industries for furniture and home goods and electronics and appliances,” Chu said. “All of that is getting impacted by this property slowdown, and that’s why I think we’re still early in the game here.”

Chu, who worked at the Federal Reserve Bank of New York earlier in her career, applauded authorities for acting to stem an excessive building campaign by developers. The amount of property being built was out of whack with the nation’s population trends, she said.

“We need to keep in mind the declining demographics in China,” she said. “The working-age population, which is really the property-consuming group, peaked in 2015 at 801 million people and is already down 20 million” since then, she said.

Read More: China’s Property Slump Is a Bigger Threat Than Its Lockdowns

“The authorities are sticking to their guns on it, and I think they are doing the right thing,” Chu said.

More broadly, Chu saw little probability of an outright financial crisis, in part because Chinese banks are “very quietly in the background working off a lot of this bad debt,” including 3.1 trillion yuan ($462 billion) in writeoffs last year.

But with debt continuing to expand across the economy, “it is, I think, one of the structural issues that is weighing on Chinese growth.” Chu concluded that “we are entering an era here where we are going to be looking at low-to-mid single-digit growth in China at best.”