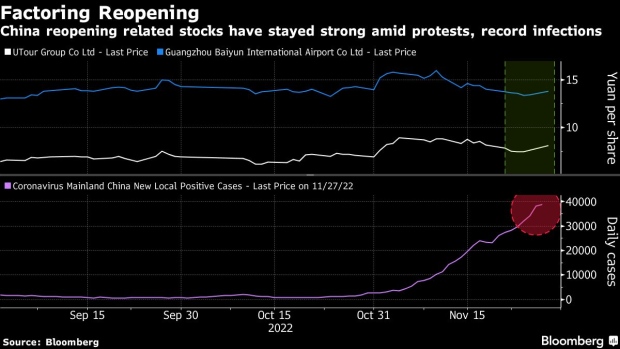 (Bloomberg) -- Swelling protests against China’s virus-induced curbs may end up encouraging President Xi Jinping to accelerate the nation’s exit from Covid Zero, according to some market watchers.

“I don’t expect Xi to publicly admit error or show weakness, but this wave of protests could cause the leadership to decide privately that the exit needs to proceed more quickly than previously planned,” said Gabriel Wildau, managing director at advisory firm Teneo Holdings LLC in New York.

Most risk assets slid in early Asian trade Monday on concern the unrest in China, coupled with surging daily infections, may convince the authorities to introduce further Covid restrictions. At the same time, the country’s focus after last month’s Communist Party congress has been on supporting the economy on a wide array of issues from reopening and the property crisis to relations with the US.

Teneo’s more positive view seems to have been reflected in China’s equity market, with stocks tied to further reopening mostly rising on Monday, bucking the weak trend in global markets.

Among major reopening bets, tour operator UTour Group Co. rose as much as 10%, Hong Kong-listed Cathay Pacific Airways Ltd. gained as much as 3.8%, and airport operator Guangzhou Baiyun International Airport Co. advanced as much as 3.6%.

“One suspects this sort of public pressure might encourage a faster pace of opening which would be a positive,” said Robert Mumford, an investment manager at GAM Hong Kong Ltd. “But it remains to be seen how the authorities react to recent events.”

--With assistance from Charlotte Yang.