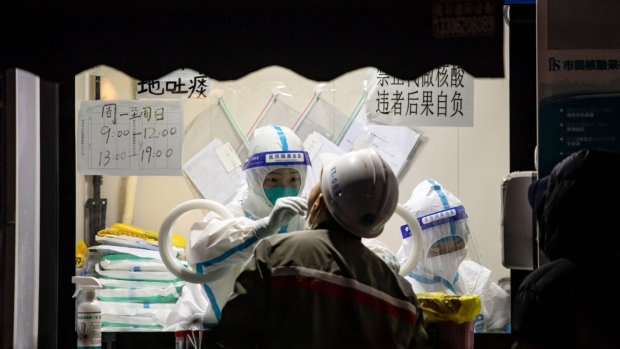 (Bloomberg) -- Chinese state media struck a triumphant chord over the country’s efforts to contain Covid-19, reflecting the government’s efforts to dilute perceptions that its shift away from the stringent approach was forced by public discontent.

“In the past three years, the virus has become weaker, but we have become stronger,” said the commentary that appeared Thursday in the Communist Party’s flagship People’s Daily and in local newspapers across the country.

“We got through the most difficult moment!” it added, before emphasizing the variant spreading in China has become less dangerous and hinting at economic reasons for making changes to President Xi Jinping’s strategy. “Epidemic prevention and development are two ends of a balance. Both are extremely important.”

The commentary also sought to portray policymakers as proactive in making the changes, while avoiding referring to the protests that broke out in cities across the world’s No. 2 economy early last week. “In the battle with the coronavirus, China has taken the initiative to adapt to changes and always puts the safety of people’s lives and health first,” it said.

The Chinese government faces a major challenge convincing the nation of 1.4 billion people that the mass testing, frequent lockdowns and strict travel curbs in place since early 2020 were worth the sacrifice now that it is radically changing course. As recently as mid-October, Xi himself publicly defended the strategy, saying it “protected people’s safety.”

People’s Daily said in mid-November that China could achieve “dynamic Covid zero,” going so far as to say it would help, rather than hinder, the Asian nation’s development. The newspaper hasn’t used that phrase since Nov. 29, just after the most widespread unrest in China in decades.

On Wednesday, the government surprised the public by eliminating key tenets of its virus elimination strategy, including forcing infected people into quarantine camps, while also easing travel requirements and rules that required frequent PCR tests to enter most public venues.

There are signs the rapid change is giving some members of the public whiplash. On Thursday, screenshots appeared on Chinese social media critical of Liang Wannian, an epidemiologist turned health official who led China’s initial pandemic response.

They contrasted Liang saying Wednesday that the current mutations of virus posed less of a threat than in the past to remarks from April, when he said the death rate was 7 to 8 times greater than the flu. Liang also warned the public in April that “as soon as we relax and not care about the virus, it will result in many serious illnesses and deaths.”

One Weibo post contrasting screenshots of Liang’s remarks was captioned: “The Chinese people will remember you.”

There’s other signs that the policy change is front of people’s minds now. Half of the top 10 trending topics on Weibo on Thursday were related to Covid-19. Internet users were discussing what to do if they got sick and how ill people may not need to visit the hospital.

--With assistance from Charlie Zhu and Davy Zhu.

(Updates with chart after sixth paragraph.)