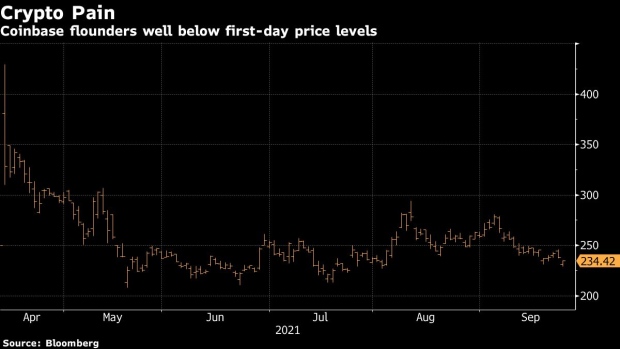 (Bloomberg) -- Five months after an unconventional route to public markets, Coinbase Global Inc. is reeling from a confluence of bad news.

Shares in the cryptocurrency exchange traded as low as $229.17 on Friday, their cheapest since Aug. 3, after China banned all crypto-related transactions. It’s the latest of several events that have pushed the stock 40% below its opening levels on April 14, the day it went public via direct listing.

“Since Coinbase has gone public, Bitcoin hasn’t gotten back to its all-time highs and that’s what has been weighing on the stock,” Needham analyst John Todaro said in an interview. “I don’t think it’s quite fair that Coinbase gets penalized on days like this, because it’s mostly an exchange business. On high volatility days like today, you’re just seeing higher volumes.”

Coinbase bonds also fell to fresh lows. The company’s assets have been under pressure amid growing scrutiny cryptocurrency industry. In addition to China’s crackdown, U.S. officials are looking to police the sector while countries including the U.K., Thailand and South Korea are also looking more closely at crypto. Thailand, South Korea and the U.K. are also among countries that have recently been scrutinizing crypto more closely.

As regulatory issues become a bigger factor, the Bahamas may become a hub for the industry. Crypto-derivatives exchange FTX said on Friday that it is now headquartered there after regulators took a proactive stance on crypto.

Since the day of Coinbase’s direct listing, when a midday selloff in the stock rattled the broader market as well as crypto assets, traders have been going back and forth on the right price for the shares.

Two of this year’s four direct listings are trading down since going public. Alongside Coinbase, Squarespace Inc. has fallen 12% since it started trading on May 19. The weakness is continuing less than a week before another company opts to circumvent the traditional initial public offering process. Eyewear retailer Warby Parker Inc. is expected to start trading on Sept. 29.