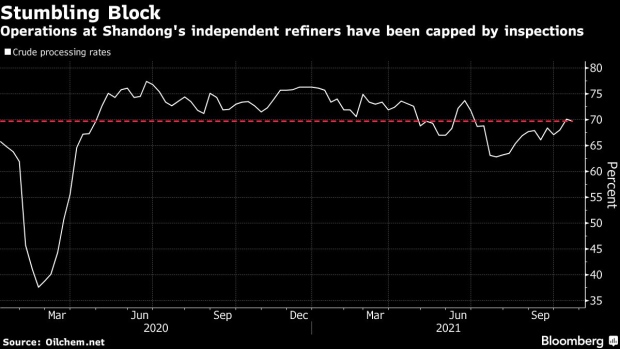 (Bloomberg) -- Chinese oil refiners are racing to avoid adding another key fuel to the list of commodities in short supply that are crippling economic activity.

The nation needs more diesel, and needs it quickly to avert similar supply shortages seen in coal and natural gas. State-owned refiners are set to boost crude processing and prioritize the production of the fuel used from heating to powering trucks and industrial purposes, said traders and analysts.

Sales of generators have jumped after diesel consumption surged following power rationing and blackouts, while seasonal factors such as fishing, crop harvesting and an online shopping spree are also lifting demand. Long lines of vehicles have been seen snaking from some pump stations, and China has reduced exports and increased imports to boost inventories.

Despite the measures, diesel inventories continue to drain at a rapid rate, with industry consultant OilChem.net estimating stockpiles are at the lowest in at least a year. Some local pump stations are limiting sales to trucks to 100 liters per vehicle, according to “Truck Brothers,” a driver club on the Tencent News platform. It cited details shared on accounts by individual users.

State-run refining giants such as China Petroleum & Chemical Corp., better known as Sinopec, and PetroChina Co. are poised for most of the heavy lifting after Beijing clamped down on independent processors. A crackdown on those in the province of Shandong for tax and environmental violations has crimped supplies from plants that were designed to prioritize diesel output.