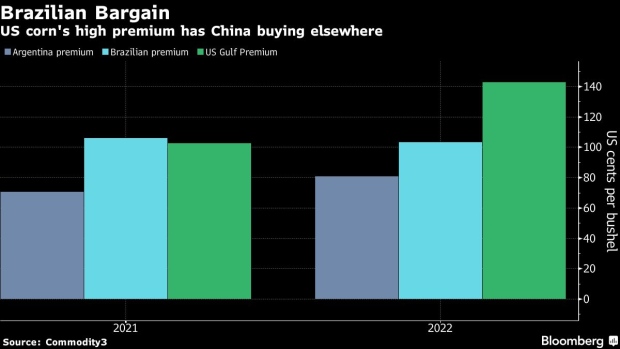 Corn grows in a field on a farm near Londrina, Parana state, Brazil, on Monday, May 30, 2022. China's state grain traders have started buying Brazilian corn in an extremely rare move, as the country seeks to ward against any disruptions to shipments from their main suppliers in the US and Ukraine. , Bloomberg

(Bloomberg) -- China is ramping up imports of Brazilian corn, replacing imports of the more expensive US grain.

Four vessels loaded with Brazilian corn are currently en route to China and five more should sail to China soon, according to the shipping agency Alphamar Agencia Maritima. Additional vessels waiting to load may also head there, pushing total Brazilian corn shipments to China past 1 million tons for the year.

Shipments to date already exceed 280,000 tons, just a month after the first cargo of Brazilian corn headed to China. Historically an importer of American and Ukrainian corn, China’s appetite for cheaper and abundant Brazilian supplies are taking a toll on US sales. Export inspections of American corn of 6.3 million tons are down 33% so far this year, pressured by a dry Mississippi River that is raising logistics costs and helping to keep supplies too expensive for importers.

There are other four vessels that could potentially leave for China soon, given their similar cargo patterns, although final destinations can change, said the commercial director for Alphamar, Arthur Neto. “These confirmations are happening at the last minute. From our knowledge, other fixtures are already in place and their nominations shall follow shortly.” If all vessels alongside head to China, Brazil’s total corn sales to the Asian nation could surpass 1 million tons this year.

European crop losses due to excessive heat and flash-droughts have left the region competing with China for supplies. Lineup and waiting times in Santos port, the biggest in South America, are increasing.

In Ukraine, corn exports are up 63% from a year ago, while total row crop exports declined over 30%. These grains are expected to be sold within Europe, which has doubled its corn imports this year.

Reduced export demand for US supplies was weighing on futures, with Chicago slumping Monday to the lowest since August.