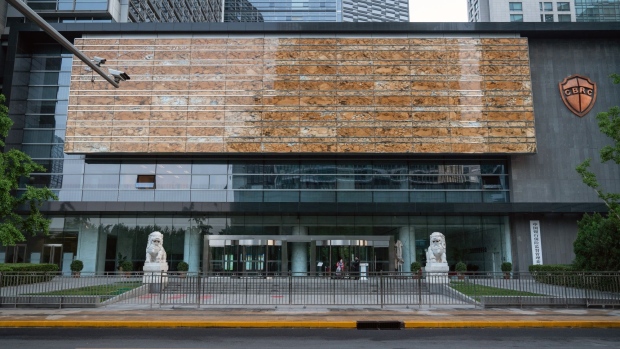 The China Banking and Insurance Regulatory Commission building in Beijing, China, on Wednesday, May 19, 2021. Beijing aced its economic recovery from the pandemic largely via an expansion in credit and a state-aided construction boom that sucked in raw materials from across the planet. , Bloomberg

(Bloomberg) -- The risks at China’s small banks are manageable after disposing of non-performing loans and replenishing capital over the past years, the nation’s banking watchdog said.

“Generally speaking, risks are under control,” said Xiao Yuanqi, a vice chairman at the China Banking and Insurance Regulatory Commission, at a briefing in Beijing on Thursday. The regulator is paying “a lot of attention” to their development, he said.

China has nearly 4,000 small and medium-sized lenders that collectively control almost $14 trillion in assets. Confidence in the nation’s smaller banks has waned since 2019, when the government seized a bank for the first time since 1998 and imposed losses on some creditors.

The remarks followed a suspected financial scam in Henan province where some rural banks were allegedly used by a local investment firm to illicitly attract tens of billions of yuan in funds. Local police have arrested suspects tied to the scam and seized some assets amid protests by hundreds of investors who bought the savings products issued by the banks.

China has helped small banks shore up capital in the past, including by allowing local governments to issue special bonds, Xiao said. The government now targets stepping up bad loan disposals and capital replenishing as well as improving corporate governance, he said. The regulator is working with authorities on the case in Henan.

Authorities have over the past five years disposed of 2.6 trillion yuan ($388 billion) worth of bad debt at smaller banks, the CBIRC said in May. Beijing is also considering raising several hundred billion yuan for a stability fund to bail out troubled financial firms.